Rachelle Heger
[view]
“Brother, my loving brother, Reyson. The pain and sadness is in you, brother. It clouds your very soul. To see you like this, to watch you. It hurts me. Please...do not lose yourself to hate.”
—Leanne to Reyson, in Fire Emblem: Path of Radiance

When she first awoke, she could only speak the Ancient Language. But under Nealuchi’s guidance, she has steadily learned the Tellius Language, gradually becoming able to speak it in broken sentences.

A survivor of the Serenes Massacre and the burning of Serenes Forest, on the night of the massacre, Leanne was sent to sleep by her sisters’ magic, and safely survived the ordeal, having been asleep in its depths. However it would be twenty years before she would awaken again. Prior to her discovery, Reyson and Lorazieh, her elder brother and father respectively, presumed her dead along with the rest of the Serenes herons.

In the midst of the Mad King’s War, Ike of the Greil Mercenaries enters the devastated Serenes Forest in search of the wayward Reyson and to capture Begnion’s Duke Oliver. Deep in the forest, Ike and his comrades are surprised to bump into a young female heron, Leanne. Ike tries to speak with her, but Leanne says something in the ancient tongue and begins to run away, only to faint on the forest floor with Oliver appearing and ordering his men to capture her. Upon hearing this, Ike grabs Leanne and fights with her on his back, Leanne still being unconscious. After Oliver's men pull back, Reyson, Tibarn and his two vassals, Janaff and Ulki, all see Ike with Leanne on his back and agree to aid them in the fight, although they remain Other Units. At this point, Leanne awakes and speaks to the two; she explains how her sisters took her to a small shrine and sung a galdr to make her sleep. The two are both surprised that she survived, and Reyson thanks the forest for keeping her safe. They also ask what Ike’s business in everything is, and he explains that he works for Begnion’s Apostle Sanaki, who wishes to make amends for the Serenes Massacre. Reyson is cynical at first, but agrees to meet with her.

Sanaki appears and immediately kneels down before the heron siblings. Although she understands it will do little to ease their pain, she apologies on behalf of her citizens, for causing the tragic event. Reyson appears unmoved, but Leanne moves to Sanaki’s side and forgives her, asking her to stand back up. Leanne says that Sanaki’s apology was sincere and tells Reyson to forgive her. Reyson is infuriated; he tells Leanne that there’s no way he can ever forgive Begnion, and he says that she wouldn’t know anything since she was asleep the whole time. Leanne replies saying that she knows, because the forest told her everything. Moreover, she explains how she cannot bear to see Reyson live his life clouded by hatred, like he currently is. Reyson understands and, although reluctant, forgives Sanaki. Soon afterwards, Reyson and Leanne invite everyone to the forest altar for a special display. The two sing the galldr of rebirth, a powerful song that restores life back into the forest; the ruined trees and soil become green once more.

With everything seemingly resolved, Reyson and Leanne together go to Phoenicis, where her bed-ridden father resides and under the supervision of King Tibarn. But as Ike and the Crimean Liberation Army make their first advance at Tor Garen, Leanne reappears with Reyson, Tibarn, Ulki, and Janaff. She goes back to Phoenicis with only Tibarn accompanying her and she stays there. However, the Black Knight captures her at Ashnard's command in hopes of having her release the dark god in Lehran's Medallion, although in actuality she cannot. She is imprisoned in Gritnea Tower in Crimea. It is here that she is rescued by Naesala while Ike and Tibarn make their advance on the tower. After the final battle, Leanne notices that Ashnard’s wyvern mount, who is still barely alive, might be a laguz. Reyson is unsure, but agrees to check to be on the safe side. The two sing the galdr of rebirth, just like in the forest, and sure enough the wyvern returns to its original form- Rajaion, a dragon laguz. Ena is then able to be with Rajaion, her sweetheart, in his final moments. Finally, Mist approaches Reyson and Leanne, and offers to return Lehran’s Medallion back to them. Reyson tells Leanne to take it, and Leanne graciously accepts the medallion. After Ashnard's defeat, she then goes with Reyson to Gallia as guests of the king, taking their father along with them. Before leaving, Leanne thanks her Beorc friends for everything that they’ve done.

After the Mad King’s War, she lived in the care of Castle Gallia. However, her eldest brother Rafiel brought word of the truth behind the Serenes Massacre which caused the laguz and beorc to edge closer to war. In order to help put a stop to the conflict, she and Nealuchi traveled to Castle Crimea together. Along the way, Leanne finds herself under attack by Begnion’s Wyvern Riders, who wish to claim her as their prize. Luckily, Queen Elincia was hovering around in the regions close by, and immediately comes to her rescue.

Back at the Crimean royal palace, Leanne tries to explain that she is looking for Ike for some urgent reason. It is revealed later that she has come seeking to tell him about the upcoming war between Begnion and the Laguz Alliance. However, Ike and his group have gone missing for a long time, so Leanne decides to stay at Crimea for a while.

During this time, Elincia uncovers a plot to overthrow her as queen. She sends Lucia to Felirae to uncover evidence of Duke Felirae’s involvement in the plot, and Leanne sneakily follows, hoping to be of some help. Lucia eventually finds suitable evidence and returns to the palace. At the same time, the investigation into Ike’s whereabouts also reaped results, although ultimately they could not be found. Elincia is shocked when Leanne responds in the modern tongue, and Nealuchi explains that Leanne has since been studying the language. Elincia also realizes that she cannot hide her hurting feelings from Leanne, as members of the heron tribe can look into people’s hearts, and she cries into Leanne’s chest, with Leanne comforting her.

In Part 3, the truth finally comes out- the Laguz and Begnion have declared war against one another, following Rafiel’s revelation that the Serenes Massacre was caused by the Begnion imperial senate. Leanne originally tried to meet with Ike to find a way to stop this war, to save her brothers. However, in the end, the war goes ahead as planned. Leanne next appears with Tibarn at Orribes Bridge, where she temporarily substitutes for Reyson, who had collapsed from exhaustion. Afterwards, she stays in the backlines, watching over Lehran’s Medallion. In the Endgame of part 3, she is given the task of keeping Yune imprisoned during the fight while Reyson and Rafiel take to the battlefield on opposing sides. As the war reaches it climax, the chaotic energies of the medallion prove to be too powerful for even Leanne to handle, and she faints. Not long afterwards, the deity sealed within the medallion is released.

After Ashera awakens, she goes with the Silver Army along with Naesala and can, depending on the player's choice of heron, accompany the heroes in the Tower of Guidance to the final showdown with Ashera. Near the beginning of Part 4, Leanne reunites with Naesala and Nealuchi. However, Naesala is under fire from Skrimir, who harasses him for causing the defeat of Phoenicis’s troops in the war with Begnion. Eventually Skrimir’s temper reaches its max and he threatens to attack Naesala. Suddenly, Leanne moves in front of Naesala and tells Skrimir not to “bully” Naesala any longer. Skrimir does not listen, which forces Naesala to lift Leanne, as well as Nealuchi, into the safety of the air. Skrimir angrily leaves and Leanne praises Naesala for his bravery.

After the world is saved, Apostle Sanaki returns possession of Serenes Forest back to the heron tribe. Leanne and the other bird tribe members agree to live there, together, in the new Kingdom of Serenes. Afterwards, along with her father, who was awakened by Rafiel’s ceremony, Leanne sings songs to motivate those in the process of building the new kingdom. Also, if she reached an A Support with Naesala, she marries Naesala and, together, they raise two children: a heron girl and a raven boy.

Leanne is much like her brother, Reyson, where she can be stubborn to the point of getting her way, which has been stated by Nealuchi when Leanne forced her way to aid Elincia in the struggle against the rebellion within Crimea, and again when she had Tibarn bring her to aid Ike and company against Daein.

Leanne is also very compassionate, and uses her ability to see into the hearts of others to give sympathy to those in need. However, due to her role in the Serenes Massacre, Leanne is innocent and somewhat childish.

She also shows a more stubborn side to herself that refuses to yield when she puts her mind to something –whether it was the influence of her elder brother Reyson or already within her own nature is unknown. She even surprised Lucia by declaring that she wanted to accompany her to Felirae to find evidence that Ludveck was behind the rebellion.

Out of the three herons available in Radiant Dawn, Leanne is considered the most balanced. While in human form, she has more movement than Rafiel but less than Reyson. She is capable of refreshing two units per turn, while Reyson is capable of only one (untransformed) and Rafiel of four. The real downside about her is the low level she joins in, however the player can choose to spend their experience points on Leanne. She will always have high luck, HP and resistance. In the long run, Reyson is a more popular choice because how much easier he is to use. She is a rather good heron candidate for The Tower of Guidance.

Forest's Song
Princess of Serenes. Reyson's younger sister. She speaks the ancient tongue and has not yet mastered the language of Tellius. Appears in Fire Emblem: Radiant Dawn.

If Ike is in the partyEdit

Leanne and her father made the forest echo with songs to stir pride in all those toiling to build the new kingdom.

(A Support with Naesala)
Leanne was united with Naesala, whom she had always loved. Together they raised a heron girl and a raven boy.

Leanne is illustrated in the trading card game Fire Emblem Cipher with the following cards: 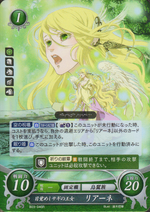 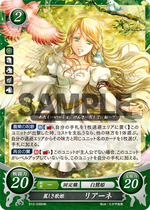