Christopher Bevins
[view]
“The old Fang was filled with vagrants and misfits. The commander would teach them how to live. Of course, being an assassin's not a job to brag about, but everyone had a kind of pride in what they were. They could at least say that they were right. That what they did wasn't wrong.”
—Legault to Isadora

Legault is a playable character in Fire Emblem: The Blazing Blade. He is a fugitive of the Black Fang who has chosen to abandon the organization and become a Thief instead.

Legault can be recruited by having the main lord (either Eliwood or Hector depending on the mode) or Lyn speak to him. His goal before joining the player is to loot all of the items in the treasure chests in that level and make off with them. He makes a clear dash across the battlefield and can be easily intercepted; he will keep anything he has already looted, so they can be used later.

Legault had been a member of the Black Fang organization since its inception. He is said to be second in ability to none except the Four Fangs, implying he had earned himself quite a reputation while he was still a member.

Through support conversations with Matthew, his past is slowly revealed as well as his motivation for leaving the Black Fang: According to him, Legault was able to join the Black Fang because of his nimble agility. He was already known as the Hurricane at the time, and was tasked with "cleaning house", which involved assassinating anyone who betrayed the Black Fang.

Legault admits that his job made him unpopular, though it was not until Sonia's arrival when he began to really consider leaving the organization after noticing that the Black Fang was beginning to crumble from the inside. Along with this, his duty as the cleaner was changed from killing only traitors into targeting anyone who was wounded and could no longer fight competently. The last straw came when he was forced to kill Aesha, a fellow assassin who had received a crippling injury that cut her career short. He appears to deeply regret killing her, and his decision to abandon the organization solidified at that point.

At this point, he appears near the Dragon's Gate on Valor, The Dread Isle with the purpose of plundering the treasure and then escaping. However, he is intercepted by one of the Lords of Lycia, who convince him to join their side and help them with his knowledge of the Black Fang. Subsequently, when the army travels to Bern, he makes another appearance in Chapter 23, where he offers advice to the three lords as they discuss their proceedings, to which Eliwood thanks him. He is seen even if the player did not recruit him in the chapter that he initially appears in.

After the war ends, Legault's fate is unknown, though his normal ending states that Legault traveled about the land looking for other refugees of the Black Fang to ease the pain of his own losses. His ending with Isadora, however, implies that he finds himself under Bern's employ.

While he talks with aloof attitude confusing those around him, he recalls the days as an old member of the group of the Black Fang and how he will never be able to love them again, forming a friendship with the like-minded deserter Heath precisely because of that. His battle conversation with either Lloyd or Linus reveal that he had a close relationship with the Reed family and Uhai.

Hiding his complex feelings for his former comrades deep within his heart, Legault ends up cutting all his ties with Nino by firmly refusing her request to accompany him after the journey ends by telling her that the life he will lead is not meant for someone like her, and that she would only slow him down.

While having the company of similar Black Fang deserters Nino and Jaffar, the thought of inevitably facing his former friends the Reed Brothers as foes is especially hard to bear, even trying to convince either them to lay down their arms when engaging either one of them at the Shrine of Seals.

Description: A former Black Fang once known as Hurricane.

Legault can be a decent thief if the player puts some effort in training him. Although he has a later joining time, his Base Stats are relative to Matthew's stats at the same level, though he may have a harder time forming supports than the Ostian thief, who has earlier and faster supports with other characters. Compared to Matthew statistically, he has slightly less HP, Strength and Speed, but superior Skill, Luck and Resistance. Regardless of his stats however, Legault has invaluable utility in unlocking doors, chests, or stealing items from enemies, and can easily replace Matthew's thieving duties or be deployed as backup for maps filled with chests. Since both his Speed and Luck stats are high, he has excellent evasion to increase his durability, especially when combined with any support bonuses he receives.

While he may not get hit very often, Legault's offensive abilities are not as great as most other combatants, even if he is promoted. His low starting Strength and equally weak growth rate for it makes it difficult for him to inflict enough damage to defeat many of the enemies in the game, especially the ones with high defense. However, if he is promoted, he will gain the Silencer Skill, which can help him instantly kill any foe with ease whenever it activates. Additionally, his base Constitution is sufficient for him to equip heavier swords and not sacrifice as much Attack Speed in the process, notably with the Steel Sword and the Light Brand amongst others. This can help him improve his attack power, as well as have an advantage over lighter characters such as Guy or Lyn.

The Hurricane
Former member of the Black Fang. He was one of the founding members and is known as the "cleaner." Left the group when it lost its way. Appears in Fire Emblem: The Blazing Blade.

“My oh my... Fools aplenty. That includes me, too.”
—Legault's final chapter quote

Legault: Hey... Long time, no see.
Lloyd: The Hurricane... I heard you you'd quit the Fang, but... seeing you with them is...
Legault: Unexpected? It shouldn't be. As soon as that sulking shadow Nergal showed up... I knew that the Fang was as good as finished.
Lloyd: .......
Legault: You know... You're the one thing that I can't figure out. Lloyd, what are you doing here? Why this?
Lloyd: Who knows... But my brother's dead. And at the hands of your newfound friends...
Legault: We're not responsible for Linus's death.
Lloyd: It does not matter. I believe you are, and that is enough.
Legault: ....... All right. I see. Nothing's going to change. I knew that, and yet... I had to try. It's a bad habit of mine.
Lloyd: Farewell, Legault. My old friend.
Legault: I'll see you again, Lloyd. With Linus... and Uhai... Even if it won't be in this world.

Legault: Hello... Linus.
Linus: Legault!? You... You disloyal filth! You of all people...siding with them!?
Legault: Calm down. Your brother's murder... It wasn't by our hands... Hey!!
Linus: Draw your sword. I won't miss again.
Legault: Remember how good the old days were? Your father, old Jan, Uhai, you, and me and your brother. When did the Black Fang lose its honor?
Linus: Be quiet!!! Stop your pathetic whimpering and fight!!
Legault: I knew this would happen. Nothing's going to change. I knew it, and yet here I am. I couldn't leave well enough alone... I'm a fool.

After the battle, Legault traveled the lands looking for Black Fang refugees. He helped them to ease the pain of his own loss.

After the war, Isadora went to Pherae, and Legault went to Bern. Though they traveled different paths, they stayed in each other's hearts. They met again ten years later on the battlefield, as enemies.

Legault is illustrated in the trading card game Fire Emblem Cipher with the following cards: 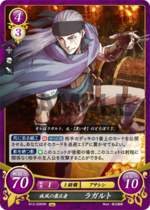