Christopher Corey Smith
[view]
“We are Legion. One is all, and all is one. Want to know how to defeat us? Simple. Just kill the real us. But, can yous find the real us? Uweheehee.”
—Legion

Legion is a boss character in Fire Emblem: New Mystery of the Emblem. He is a masked Berserker working for Eremiya. He commands several fighters seemingly identical in appearance and personality to himself, affectionately reffering to them as "brothers". If Legion dies, all of his brothers "break", being unable to fight anymore.

Legion has a distinctive speech pattern, and usually uses the pronoun "we" instead of "I", in reference to his name and his many brothers. When referring only to himself, he sometimes instead just uses "Legion" in the third-person.

Legion was raised to be an assassin in an orphanage by Eremiya. Several other orphans were trained to follow him blindly, copying his name, personality and appearance, likely to save time in training new assassins. Under Gharnef's orders, Legion worked with Katarina and Clarisse to assassinate Marth.

Throughout the game, Legion's brothers are used as cannon fodder by Eremiya and Clarisse, due to their large numbers. But after most of them are killed, the real Legion is forced to make an appearance.

In Chapter 10x, Legion is killed by Marth's army, and as a result, all of his surviving brothers cease to function. Eremiya, knowing that the remaining Legions would now be useless in battle, ordered Katarina to kill them. Katarina strongly refused, finding the act too cruel, causing Clarisse to take care of the job in her place.

Legion loves battles and little else. He always wants to fight and strongly believes that victory is in numbers. He fights with no concern for his own life, only caring whether the original is killed or not. Despite their shared love for battles, Clarisse doesn't seem to like him very much.

He's very devious, mocking enemies and allies alike on whether they're talking to a brother or the real one. It's possible that every Legion knows who the real Legion is.

Despite his brutal personality, Legion also has a softer side. The reason he calls all of his underlings 'brothers' is due to the fact that they were all raised in the same orphanage, even correcting Clarisse when she refused to call them as such. In Heroes, Legion defends Katarina when Clarisse criticized her for not doing her job correctly, openly calling her a liar and stating that Katarina did what she was asked to do. In one of his home screen dialogues he mentions that "they" hate Katarina, but also like her.

In his level 40 dialogue in Heroes, he is shown to be aware of his own mental state, acknowledging that him and all his brothers have had their minds broken by Eremiya.

It's hard to establish the personality of Legion's brothers. It's unknown if Legion's brothers are fully aware that they are trying to imitate Legion, if they are just empty shells without a will or if they each have distinct personalities that they keep hidden. But from various interactions, they are shown to share many traits with the real Legion.

Masked Maniac
One of a group of assassins. Wears an odd mask, as do his many "brothers". Appears in Fire Emblem: New Mystery of the Emblem.

Legion is illustrated in the trading card game with the following cards: 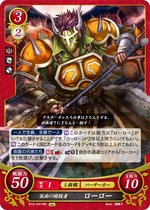 Legion's English name is a Biblical reference to the exorcism of the Gerasene demoniac (Mark 5:1-20, Luke 8:26-39) where Jesus asks demon's name, and the demon answers, "My name is Legion, for we are many." This itself is a reference to a Roman legion (legio), which consisted of several thousand soldiers.