Lehran's Medallion (エルランのメダリオン Eruran no Medarion), is an artifact that is also known as the Fire Emblem in Fire Emblem: Path of Radiance and Fire Emblem: Radiant Dawn. The medallion radiates the chaotic energies of the imprisoned Yune, making it dangerous to touch, and is an important artifact relating to Ashunera.

Seven-hundred and eighty years before the events of Radiant Dawn, Ashera, the goddess of order, decided to destroy her counterpart Yune, under the belief that Yune's chaotic nature blemished her perfection and posed a threat to the world. However, Lehran, Ashera's closest consultant, asks her not to do so, and to instead seal Yune into a bronze medallion. Ashera agrees to his counsel, under one condition: that if there were no war on Tellius for the next 1000 years, she would allow Yune to be freed and to reunite with her. However, if the beorc and laguz are not able to keep the peace for this time, Ashera will destroy the existing world without hesitation. But if she were to be awakened instead by the Galdr of Release, she promised to first have counsel with Yune before acting. To stop the beorc and laguz from warring, stories are spread that Lehran's Medallion contains a "dark god", who will destroy the world if it wakes.

Several years before Path of Radiance, Mad King Ashnard obtains Lehran's Medallion and plans to pitch Tellius into war by freeing the "dark god". To do so, he kidnaps Lillia, a heron princess from the royal line of the heron laguz clan in Serenes, to sing the Galdr of Release. He keeps her locked in a windowless room in Palmeni Temple, where Elena sees to her well-being. However, Lillia is unable to release Yune from the medallion, as her powers have faded due to exhaustion. Lillia then passes the words, melody of the Galdr, and the Medallion to Elena and eventually dies in the Temple due to her bad condition. Elena subsequently leaves Palmeni Temple, with a plan to bring the medallion safely back to Serenes, but she and her husband Greil have to flee from the Daein army for several years, and finally find refuge in Gallia.

After living peacefully in Gallia with Elena and his young children Ike and Mist for several years, Greil makes the mistake of touching the medallion. The chaotic energy in the artifact drives him to violent insanity, leading him to go on a rampage that is only stopped when Elena tears the medallion from his grasp as he kills her. From that day forth, Greil never touched the medallion again, and forbade his son Ike from ever touching it, as well.

When a person touches the medallion, it magnifies the worst aspects of a person a thousandfold while rendering them insane for as long as they have possession of it. Only people with spirits of balanced order and chaos are able to touch it unaffected. Mist and her mother Elena are the only beorc known to be able carry it safely, while the Heron royals also can do so. After Elena's death, Mist inherits the medallion from her, though the truth of its nature is kept secret from her until the end of Path of Radiance.

In Radiant Dawn, during the finale of part 3, the chaotic energy of the medallion increases due to the fighting, until eventually Mist, Reyson, Rafiel and Leanne collapse. Mist advises to wake the dark god with the Galdr of Release instead of doing nothing, and so Micaiah, at this moment already possessed by Yune, sings the Galdr, and Yune is freed. Although Ashera had promised first to discuss her plans for the beorc and laguz with Yune, she instead reneges on her centuries-old promise and instead judges the peoples of Tellius in that instant. Ashera turns most every sentient inhabitant of Tellius to stone. Only those of a strong enough will to resist her judgement, as well as members of the Branded were spared. Yune, Micaiah, Ike, and the other spared warriors face off with Ashera in the Tower of Guidance at the end of the game. 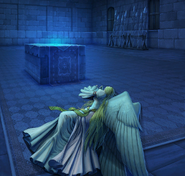 Leanne overwhelmed by the medallion's power