Rebeka Thomas
[view]
“We're spies, Matthew. Everything we do is dangerous.”
—Leila to Matthew in Ch 16/17: Whereabouts Unknown

Leila is a non-playable character from Fire Emblem: The Blazing Blade. She is a spy from Ostia and serves under Hector. She had a lasting relationship with a fellow spy, Matthew.

Not much is known of her history, though it is known that she had served as a spy for Ostia, keeping watch over the events of the Lycian league for the current Marquess of Ostia, Uther. Sometime in the past, she ran into Matthew when he was first employed, and the two became fast friends. Later, their relationship deepened, and they fell in love. And while Matthew had thoughts of asking if they could both leave this line of work behind, he procrastinated until it was too late.

Ordered to look into the disappearance of Marquess Pherae, Leila infiltrated the Black Fang as a member, and earned the trust of the morph Ephidel. Ordered by him to dispose of Marquess Caelin while he guards Darin and escorts the marquess to Valor, The Dread Isle. Leila agrees and quickly takes the body of the marquess, leaving the sage to quietly smuggle Darin out of Caelin. With the decimation of Laus's army and the death of the Knight Commander, Bernard, at the hands of the group, she appears before the lords and reports her finding, as well as accompanying Lyn to her grandfather, which Leila had tended to in the morph's absence. Soon after informing the lords, she bumps into Matthew, who happily comments on her safety despite the perilous predicament. Leila replies by saying that they were spies, and what they were doing was always dangerous.

She soon returns to Valor and the Dragon's Gate, and eavesdrop on a conversation between Nergal and Ephidel. Learning of a plot to murder the lords on the Dread Isle and influence the king of Bern, she quickly rushes to their aid, though is intercepted by Ephidel. Leila tries to talk her way out of Ephidel's grip, though he already suspected her of relaying information to Hector. He then asks Jaffar, an assassin and one of the legendary Four Fangs, to remind Leila of the punishment for treason. Jaffar does so, killing the spy. Realizing that her wish for a future with Matthew was now impossible, she called out his name in her final moments.

At Ephidel's orders, Jaffar leaves her body in the forest for Eliwood and his companions to find. While for a short moment they see her figure and believe her to be well, they quickly realize that she is dead, leaving Hector and Matthew particularly saddened and enraged. She is then given a tender burial, while Matthew reveals to Hector that he had planned to marry her.

Alternatively, if Matthew dies beforehand, Hector promises to bring her body back to Lycia to be buried next to Matthew.

Leila can be best be described as the perfect example of a careful and cautious spy, keeping a silent aura about her and leaving herself unnoticed, easily blending into the Black Fang's organization for quite some time. She was able to mingle with most of its members and retrieve the information that aided the lords greatly on their missions, showing that she was able to keep a collected and calm mind in the fortress of the Black Fang.

Despite this, she also is shown to have the same sardonic and optimistic attitude that Matthew retains, showing that the two are very similar in terms of ability and personality, though they go about their job in different ways. She, like Matthew, holds a deep love for the other, saying his name before she dies.

Leila is unavailable in the game as a playable character nor as a NPC accessible during your player phase. Her sprite only appears at the intro of Chapter 18/19: The Dread Isle, where she is killed by Jaffar. Oddly, she appears as a Thief during the combat screen, though her map sprite is of an Assassin's. However, through hacking, it is discovered that you can access her stats and add her as a playable character. Should you do this, it is revealed that she has high base stats and impressive growth rates even for a Thief, making her one of the most powerful units if she was ever used in your party. The only thing she really lacks is Constitution to maintain her Attack Speed, so a Body Ring would be a useful item to use on her.

Rose amid Fangs
A member of the Black Fang group of assassins whose true loyalties lie with Ostia, which she serves as a spy and skilled infiltrator. Appears in Fire Emblem: The Blazing Blade.

Leila is illustrated in the trading card game Fire Emblem Cipher with the following cards: 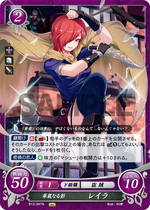 'Leila' means 'night' in Arabic. Her name is probably inspired by the Leila of Lord Byron's poem 'The Giaour,' where Leila, one of Hassan's harem-girls, is killed by Hassan for her infidelity with another lover.