Chapter 3: A Brush in the Teeth (Shadow Dragon and the Blade of Light)

Curate (Shadow Dragon and the Blade of Light)

Brittany Cox (Heroes)
Tiffany Grant (anime)
[view]
“Please, sire. I am a cleric. I cannot bear to watch others come to harm when I have the power to help.”
—Lena in Shadow Dragon

Lena is a playable character from the Archanea Series of Fire Emblem. She is a cleric who hails from a noble family in Macedon. She is also the lover of Julian.

Lena is the descendant of a powerful noble family based in the country of Macedon. Her mother once served the Grustian royal court as a bishop, and it is therefore perceived that Lena inherited her talent as a cleric from her mother. After her mother passed away when she was only ten years old, Lena was sent to live with her maternal grandfather in Grust. Residing in Grust for several years, Lena trained as a cleric by regularly paying visits to remote regions of the country with her grandfather, where they provided much-needed aid to the farmers who were either beset by illness or constant pillages by bandits. Her grandfather soon became too old to continue this work of charity, and she therefore resolved to upkeep his legacy in his stead.

While in the midst of carrying out her self-imposed duties of acting as a saviour to the less fortunate, Lena became acquainted with General Camus, who shared her vision and was already providing aid to the people at the time of their first encounter. While working alongside Camus, Lena was influenced greatly by him, learning that justice usually required self-sacrifice in order to be obtained.

When Prince Michalis of Macedon was coronated as the king of the country, Lena's foster father summoned her back to the Macedonian royal court, where she was imposed the duty of serving as an official under Princess Minerva. During a meeting with Michalis, Lena was requested to wed him in order to fulfil his selfish ambitions of both monopolising her wisdom and beauty and forging a familial union with the powerful elder nobility on Lena's foster father's side. When news of Michalis' proposal spread, Lena was regarded with envy by many women, who yearned to reap the benefits that could only be derived from being his spouse. In an act of defiance, Lena bluntly rejected the proposal, promptly departing from Macedon thereafter.

At an unknown period of time after she left Macedon, Lena became acquainted with Rickard, and the both of them supposedly worked together as "honourable thieves" who stole from the wealthy in order to provide amelioration to the poor, although most of the dirty work was performed by Rickard against Lena's feeble protests. Shortly after the palace of Archanea falls to Dolhr, the pair traipses into the palace town in Episode 3 of Archanea Saga, where Rickard contemplates looting the riches lying in wait within the walls of the Archanean Palace before leaving Lena's side to scout for potential bodyguards to aid him in his quest. While awaiting Rickard's return, Lena is harassed by a lascivious bandit, but is rescued from her distress when Navarre enters the scene and scares him off. As Navarre prepares to leave, Lena halts him in his tracks and requests for him to be the bodyguard of both her and Rickard, to which he relents after hearing her reasons.

Rickard later returns with Castor, an injured Hunter whom he had earlier saved, in tow. The group of four then proceeds to rendezvous in a local inn, where they discuss the details of their plan to break into the palace. The plan is executed the next morning, where the group raid the chests with Lena supporting them with her recovery and teleportation magic. While in the midst of looting the palace, the group chances upon Dice and Malice, a father-daughter treasure hunter pair who agree to aid them in exchange for a share of their spoils. As the group attempts to sneak back out of the palace, they are intercepted by General Camus. In response to Camus's incredulity at her choice to engage in thievery, Lena defiantly defends herself, asserting that her actions are done for the purpose of easing the pain of the citizenry who are suffering under Dolhr's tyrannical reign. Although moved by her words, Camus chooses to dutifully go by the book, to which in a rare outburst of anger, Lena responds by questioning whether he is nothing more than a pawn of Dolhr.

Princess Nyna of Archanea intercepts Camus in the nick of time, where she persuades him to grant Lena and her allies reprieve, just as he had done for her when he led the invasion of Archanea Palace in Episode 1. Nyna then briefly speaks to Lena, formally granting her permission to keep the looted treasures and distribute them to the needy, before requesting Camus to lead the group to safety. After she is freed, Lena will continue to travel with Rickard, presumably to use the looted treasures to amplify her mission to aid the poor.

Lena later appears in Chapter 3 of Shadow Dragon and the Blade of Light, where she has been captured by the Soothsires, a band of thieves that is notorious for terrorising the lands encircling the Samsooth Mountains. Julian, a former member of the Soothsires, betrays them by rescuing Lena from their stronghold within the domains of the mountain range. Her attempt to return to the stronghold to retrieve her misplaced Mend staff is brushed aside by Julian, and she is thereafter led to the safe custody of the approaching troops of Marth's army.

When Marth's army enters the realm of Aurelis in Chapter 4, Lena chances upon her older brother Matthis, who has taken up arms and allied himself with the enemy. After chastising him for his poor, cowardly choice, she manages to convince him to defect to Marth's army.

Lena then resolves to aid Marth in ending the War of Shadows, and following its conclusion, she returns to Macedon, where she, alongside Julian, sets up a monastery to care for orphans.

At an unstated time prior to the events of Book 2 of Mystery of the Emblem, Lena took Marisha under her tutelage, training her to be a cleric. Shortly after, Lena, alongside Elice, Maria and Nyna, were abducted by Gharnef, who intended to use them for the nefarious purpose of resurrecting Medeus.

Lena later appears alongside the other three kidnapped priestesses in Chapter 24, where she has been placed under a trance by Gharnef, compelling her to serve as a shield to protect Medeus from coming under harm. Fortunately enough, Julian succeeds in breaking her out of her reverie, rescuing her from an untimely death. Medeus is felled shortly after all four noble priestesses are rescued, and following the termination of the War of Heroes, Lena is formally wed to Julian. She thereafter leads a life of serenity with him in Macedon, caring for orphans in her convent alongside Minerva and Maria.

Lena is portrayed as an individual who is compassionate, magnanimous and selfless, a fact that is strongly proven by her having made the act of harnessing her healing capabilities to tend to the needy her personal life's crusade. Further complementing these traits of Lena's is the fact that she is passionate in fulfilling her self-imposed duties as a cleric, one that has seen her going beyond the line of duty by completely disregarding her safety in order to provide assistance to the sick. This is the case during the events directly preceding Chapter 3 of Shadow Dragon and the Blade of Light, where she, ignoring the warnings of many good-willed villagers, makes her way to the residences around the Samsooth Mountains in order to tend to the ill.

Lena's passion is one that also extends to her inclination to be strong-willed and obstinate in standing up to defend her beliefs and convictions; her harsh admonishment of Camus after being caught stealing from the rich to aid the poor proves as much, as his adamant resolve to conform to his duties as a loyal knight of Grust motivates her into lashing out at him, referring to him as an insignificant "pawn of Dolhr".

Lena is also portrayed to be prudent in the manner by which she carries herself, as can be evidenced through her originally denying her romantic feelings towards Julian in recognition of her position as a noblewoman. When she is in a state of vulnerability upon being rescued by him much later, however, she lets fall her true feelings, to the extent that she forwardly proposes to him.

In spite of the presence of all these positive traits that adorn Lena's portfolio, she has the tendency to be naive, a fact that stems from her inclination to believe that everyone is inherently good at heart. This is evidenced through her interactions with Rickard in Episode 3 of Archanea Saga, during which he feigns tears when Navarre expresses suspicion of his true devious intention in raiding the palace for his personal benefit. Lena is the only one amongst the group of four to be deceived into believing Rickard's tears to be genuine, perceiving him to be "but a fragile child whose feelings are easily hurt".

Note: Relevant in Book 1 only

In Shadow Dragon and the Blade of Light, and its two remakes, Lena is, at base, the best support unit in the game, hands down, due to her potent combination of great staves early on, as well as her high availability. Lena's ability to use Warp at any point after she joins is insanely useful in a game full of long seize maps with loads of ambush reinforcements, Lena is there to warp a boss killer or warp Marth to seize and complete the map before things become too difficult. She can also use Physic to heal others and keep herself out of danger, if needed. Once the player has obtained multiple Warp-users, such as Wendell or Boah, Lena's uniqueness declines somewhat, but in many cases, having two or even three Warp-users can be helpful. While she can promote, it's more worthwhile to leave her unpromoted, as she really doesn't gain much from promotion and is a terrible combat unit, allowing you to save the Master Seal to promote someone else, or, in Shadow Dragon, sell for better forges. Much later on, in chapter 20, she can obtain the Hammerne staff, which allows her to repair any weapon or staff. This gives every Warp user, including herself, even more warps to finish off the game. All in all, Lena is an absurd unit who is always worth using as a staple.

*Dropped if defeated as an enemy.

In the second book of Mystery of the Emblem and its remake, Lena is recruited during the final chapter with low base stats. After saving her from Medeus, moving her to safety is highly recommended, although, unlike the other 3 bishops, she can survive a hit from the Ice Dragons on lower difficulties, due to her base speed being 13, and her alright 6 defense for a level 3 Bishop, although moving her to safety is still recommended.

Tender Angel
A cleric revered as Macedon's Angel. Cares for orphans in her covenant after the conclusion of the War of Shadows. Appears in Fire Emblem: Mystery of the Emblem.

Frontier Saint
"At a monastery in Macedon, she cares for orphans."

Macedonian Bishop
"At a monastery in Macedon, she cared for orphans."

Angel to All
"Lena cared for orphans at a convent in Macedon and doled out love in equal shares to all she met."

Macedon's Angel
"Lena cared for orphans in a convent in Macedon. Her kindness healed the hearts of many."

Lena is illustrated in the trading card game Fire Emblem Cipher with the following cards: 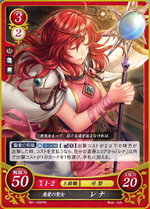 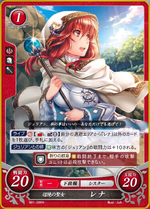 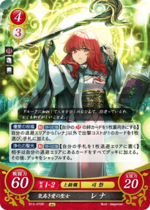 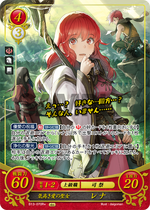 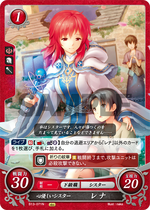