Faye Mata
[view]
“Hee hee! You're still going on about that, are you? Oh, you dolt. I mean, think about it. Both your father and that Sigurd man were knights, weren't they? And isn't killing part of a knight's job? It's like my job. Sometimes, I've got to dance for foul, leering men! I hate it, but it's part of the work. I have to just deal with it. We've all gotta do what we gotta do to get by in life. I dunno... I just don't think it's right to hate someone for doing their job.”
—Lene to Ares in Genealogy of the Holy War

Lene is a playable character from Fire Emblem: Genealogy of the Holy War. She is the daughter of Silvia and the older sister of Coirpre. Her substitute character is Laylea. She is approximately 17 years old.

Sometime after the Battle of Belhalla, Lene and Coirpre were abandoned by Silvia at an orphanage in Darna. Fifteen years later, she is working as a dancer in Darna, where she meets and gets close to Ares.

When Ares departs to fight for Javarro, Lene and Ares have a discussion, as she disapproves Ares wanting to go to war and finds his grudge against Sigurd's descendant foolish. When Ares is far away, she refuses to become Bramsel's personal dancer, and she is thrown into the dungeon of Darna's Castle. It is believed that she may have been further abused by him, but it's not fully clear.

The castle in which she is held as a prisoner is eventually seized by the rebels, and she is freed from her cage by Seliph, or a member of his army. She later meets Ares again when he is subjected under the army of Seliph, and he asks if she is ok, she answers negatively but is relieved to see him alive and well.

Later, Lene introduces herself to Seliph and is surprised when he flushes and acts flustered on her presence. She discovers that he never saw a dancer before, and she finds his awkwardness lovely.

In Chapter 9, Lene meets Coirpre for the first time in her life, although neither of them recognize each other. Coirpre reveals that he didn't think highly of dancers until he met Lene.

If she is not paired at all, she will return to Agustria and keep with her job at dancing. Seliph tells her that she will eventually find someone amazing that could make her happy, but she answers that she would be happy even alone as she would be making what she loves the most: dancing.

Lene has a cheerful exterior but hides a more vulnerable and emotional side of her personality deep within herself. This is attributed to the difficulties that she suffered after being abandoned by her mother. She wishes to find Silvia and became a self-taught dancer for that reason. If her father is Lewyn, she expresses her feelings of loneliness caused by growing up without ever knowing her parents. She also reveals to Lewyn that she has always felt as if her father has been looking out for her.

Lene also has a very realistic world-view, as she is aware that certain things must be done in order to survive, even if a person doesn't like it. This causes her to be quite bitter about the world itself, though she hasn't lost her heart completely.

Her profession is also shown the be the target of prejudice, as the characters seem to objectify or overall look down to dancers.

Lene plays the exact same role as her mother does, which is that of being a Dancer who refreshes units who have used up their turns. However, her replacement, Laylea, may be a slightly more popular choice, as she possesses the Charisma skill, which is very useful for supporting adjacent units. However, Lene can inherit the Knight Ring and the Leg Ring, which makes a Dancer much more useful by granting her additional movement around the battlefield, boosting her ability to refresh units. Furthermore, Lene is more durable than Laylea, as she has slightly better stat growths and possesses the ever-useful Prayer skill; this is particularly disadvantageous for Laylea because Charisma users must be close to allies who are in enemies' range, potentially putting her in mortal danger that the player would not need to put Lene in.

If you want Lene to help out in combat it is best to give her a Shield Ring, a Power Ring and the Defender Sword to let her survive hits better. Depending on the father her Defense stat paired with the Defender Sword and Shield ring can get really high. You may also want to consider giving her a magic sword as it's likely that her Magic stat will be better than her Strength stat, although, should Chulainn be her father, giving her the Brave Sword (by selling then buying it as Silvia cannot pass it down to Lene) could make her a decent combat unit, in combination with her high skill growth rates (due to the Minor Od Holy Blood) which will allow her to power up her attacks with Luna, which will activate 2 Luna hits per swing of the Brave Sword, due to the way the "Brave" series of weapons work in the game she appears in.

In Chapter 7, Lene may speak to Seliph, but nothing will result of it.

In Chapter 9, after Hannibal is recruited, Lene may speak to Coirpre, and he will gain one point of luck.

In Chapter 10, after Rados Castle is captured, if Lewyn is Lene's father, Seliph may speak to Lene, and she will gain five points of defense.

Yearning Dancer
A dancer and descendant of the high priest Bragi. She understands how the world works, but she doesn't let it get her down. Appears in Fire Emblem: Genealogy of the Holy War.

Lene is the second Sword Infantry dancing unit and is for the most part similar to Olivia in nearly every stat category, usually with the difference between the two being a mere 1-2 point distance. Spd is particularly her best stat advantage to avoid some critical units from doubling her, but usually with a skill like Fury to reach enough Spd to avoid more matchups. Stat wise, Lene has very few advantages over Olivia and Silvia, both whom are sword infantry dangers and as overall sword dancers, Olivia and Silvia are better options simply due to the fact that they are far easily acquired and are excellent merge projects if looking to make a solid dancer unit.
Lene has Safeguard, increasing her Def by 7 when her opponent initiates combat. While it provides very little in combat other than pushing her otherwise low Def into middling at best when attacked.
Lene's ability to Dance is beneficial to a team, especially as another dancer to use on battles like Arena Assault for teams. Firestorm Dance is perhaps the best stat dance boost possible due to the +3 Atk/Spd buff she gives to her ally. While the timing of using it can be slightly off, it nonetheless is a great option. Finally, Lene is one of three units to have Sword Valor and she is perhaps the best user since she can apply herself to a team, allowing any Sword unit in training to not only reap the double SP gain, but also free up a slot for a secondary/tertiary dancer or a healer.

Lene is easily countered by any sort of Blue unit, especially Blue physical units who can target her lower physical bulk. As a supportive unit, removing her can dismantle a team strategy entirely. Other than that, attacking her from a distance with strong mages like Ophelia, Ishtar, Linde are excellent counter. Bridal Fjorm can also disable her Dance since Lene's HP is nowhere near enough to avoid being affected by [Isolation].

Lene fits nicely into the dancer mold, thus the standard Dancer skill set is suggested. Weapons are flexible for inheritance if Safeguard is not to the player's desires. Wo Dao and Slaying Edge are great weapon inheritance simply to boost her combat abilities better than her default weapon. Moonbow charges quickly for a Special and can be unleashed sometimes in a single round of combat. Fury is a flat stat boosting skill that does provide recoil, but this only applies in certain situations where she is forced to fight, which should not be a priority. Wings of Mercy allow her to teleport to injured allies and help them move out into safety. Skill C is flexible for various skills such as Hone/Fortify/Wave/Drive/Smoke skill. This is more for a competitive player who wishes to solely use her in that sort of setting such as Arenas.

Lene is illustrated in the trading card game with the following cards: 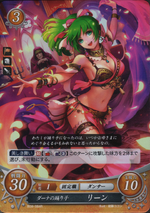 Lene means "light" and "torch", is a shortened version of Heléne, variant of the Greek name Helen, the legendary beautiful queen of Sparta who was the pivot of the war of Troy.