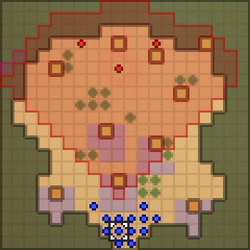 Izana (End of chapter, if My Castle has a level 3 Hot Springs)

Leo (暗夜王子レオン Anya Ōji Leon lit. Dark Night Prince Leon in the Japanese version) is Chapter 18 of Fire Emblem Fates in the Birthright Version. Notable features include numerous bogs that damage Hoshidan units, a multitude of exceedingly weak Faceless reinforcements, and Dragon Vein points that the boss can use to summon additional Faceless. This chapter takes place in the Woods of the Forlorn.

Even though it only shows Leo, Odin, and Niles from the start, 3 faceless will appear in every marsh area on the map as soon as you start the chapter. Similar formations of faceless will appear sporadically throughout the chapter. Leo can activate Dragon Veins to summon additional reinforcements, each of which are capable of moving on the same turn they were spawned, and will do so three times. Finally, after the faceless reinforcements have been exhausted, Leo and his retainers will become aggressive. As his retainers each drop useful gear upon defeat, the player should be prepared to take out Leo and his retainers in one turn.

The Faceless, even on Lunatic, are extremely weak compared to the enemies you've fought up to this point, and pose more as an annoyance to high defense units. Certain faceless do possess one skill each, but these skills are limited to Strong Riposte (Damage +3 when counterattacking), Strength/Defense/Resistance +2, and various Weaponbreaker skills, though their low avoid usually puts the hit% of a weapen broken skill at above 50%. Some can also posses Counter, Vengeance, and Vantage.

Though they pose little threat solo, the Faceless can become dangerous if you allow large numbers of them to surround you. One possible time this can occur is if Leo activates the upper right Dragon Vein, which spawns a larger number of Faceless than all the other swamps. Otherwise, this should only really occur if you actively do not kill any Faceless on your turns.

If you wish to end the map quickly while simultaneously getting the gear off of Odin and Niles, the best way to do so is to have some flying units, preferably three or more and optionally in guard stance with more capable units, and have them sneak around through the Thick Woods, as none of the enemy is capable of targeting your units there. Once they are in position, have two of them target Odin and Niles and defeating them. Be wary if you target Niles from a distance with your flying unit, as he can very easily kill them in one shot or get a critical hit. Once they are down, you are clear to attack Leo. Bringing a Beast Killer or Kitsune along will make things especially fast, though Leo shouldn't be able to survive an assault from a high speed unit either way. If things go well, you will defeat all three at once, win the chapter, and get two useful pieces of weaponry as well as an Energy Drop.

Falcon Knights have the easiest time here since both Odin and Leo are defenseless against Lances and typically have higher Resistance than Defense. Bringing a Dual Naginata or an alternate unit to attack Niles isn't necessary, but may be smartest.

Be sure to keep your ground forces near the starting point well guarded so that the Faceless can't swarm your weaker units.

Characters must be a Nohrian class as their base class to be considered immune to the effects of the bogs, regardless of reclassing or a child unit having Nohrian parentage. As stated by Leo, Corrin is unaffected, even if they are in the Hoshido Noble class. This is also true for Silas, Felicia, Jakob, Scarlet, Kana, Sophie, Dwyer, and Anna.