Leon is a playable character from Fire Emblem Gaiden and its remake, Fire Emblem Echoes: Shadows of Valentia. He is 24 years old.

Leon was comfortably raised by both parents in a calm village. Because of his effeminate looks, he was often bullied, and became stronger through challenging such people to duels to prove himself.

A former soldier, Leon reluctantly joined the Zofian army when an unnamed man, whom Leon had long held a love for, enlisted. Said man died in battle, and Leon entered a state of depression. However, due to his companion Valbar's encouragement and kind words, he got back on his feet and has been attached to him ever since. After Barth is defeated, he joins Celica's party.

Leon has a pretty boy personality and sharp tongue, but he is an honest man that tells no lies. Leon has a nihilistic side, claiming he has desired to die in battle during his death quote in Gaiden; this is downplayed but still present in Echoes, where his death quote has him lament how his demise isn't as impressive as he thought it'd be.

In both versions of the game, Leon has a very close relationship to Valbar, describing him as his sworn brother and saying he will go wherever Valbar goes. In the remake, it is made clear Leon's attachment to Valbar is romantic, with Leon saying that women do not interest him and Valbar is all he needs, even if Valbar never notices Leon's love for him.

He also mistakenly thinks that Kamui is hitting on him in their support conversations, declining him while, at the same time, talking about Valbar being his ideal man. In his third base conversation with Celica, even she recognizes that his feelings for Valbar are romantic.

Additionally, Leon is a very idealistic and generous man who makes a point of protecting and saving those who need help. As mentioned in the quote above, he believes in the goodness of humanity and deeply wants people to be happy and safe. If Valbar does not survive the battle where the two and Kamui are introduced, despite being in heavy mourning and blaming Celica for not helping them enough, Leon still tells Celica that he will join her cause so Valbar's death won't be in vain. His battle quote against Duma has him saying that a world like the one Duma desires would be "dull as dirt" due to the lack of love.

(If Valbar lives)
"Welcomed into the One Kingdom's Brotherhood of Knights, Leon remained at Valbar's side until an injury ended his fighting career. He then took up work as a merchant in the city market, where he lived free, happy, and dauntlessly true to himself to the last."

(If Valbar dies)
"Dealt a grievous blow by Valbar's death, Leon disappeared for a time before returning to join the One Kingdom's Brotherhood of Knights. There, he fought with the strength of a hundred men, and later served as an instructor to new recruits, contributing greatly to the order."

Leon is illustrated in the trading card game Fire Emblem Cipher with the following cards: 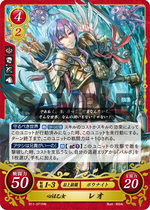 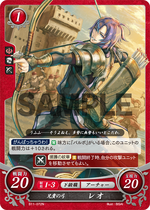