Archer
[view]
“Don’t look so sad, Micaiah. You’re not responsible for this war. We’re doing the best we can hope to do. But I’m fighting for Daein. The circumstances may change, but my feelings never will.”
—Leonardo to Micaiah

Leonardo is a playable character in Fire Emblem: Radiant Dawn. He is an archer of the Dawn Brigade. He is a mature and serious young man who had a noble upbringing before his family was ravaged by war. Along with Edward and Nolan, he receives a personal weapon; the bow known as Lughnasadh, as a gift from Pelleas.

Since detailed support conversations were removed from Radiant Dawn, not much information on Leonardo's past is available in the game. However the released designer's notes help to shed more light on the subject.

The notes reveal that Leonardo is the son of a noble. Leonardo lost his father and older brother in The Mad King's War, and became an orphan as his mother soon followed them. After Daein's defeat in the war, the military school where Leonardo studied fell into the Begnion Occupational Army's hands. While everyone is being sent to the prison camps, he flees alongside a few colleagues. However, those colleagues are captured, one after another, and Leonardo ends up being the last remaining one. When he loses his way and is cornered by the Occupation Army, he is saved by a youth of his age. That was his first encounter with Edward, who would later become his best friend.

Leonardo's personality is the opposite of his friend Edward, who Leonardo regularly nags in an effort to teach him self-control. His views can be best described as being down-to-earth, though he can be occasionally skeptical or bitter. Quiet by nature, Leonardo's personality rarely surfaces, though he is said to have good composure. For the most part, he is characterized by a subdued and pensive demeanor which is evident from his few Base Conversations. He has a strong sense of loyalty to his country, and dislikes the senselessness of wars. He and Edward both seem to look up to Nolan, who acts like a mentor to them.

Throughout the game, he shares a particular bond with Edward. This is supported in a base conversation they have, in which Leonardo presents Edward with a Tempest Blade, and remarks that the two of them are each other's best friend and family.

Leonardo joins as a first-tier unit, and is rather difficult to train, a result of his fairly limited availability. Leonardo is notable for having unusual stats for his class due to his abnormal Growth Rates. On average, he will have extremely high Skill, Luck, and Resistance, average Strength and Defense, and below average Speed and HP.

As a result of his uneven stat distribution, Leonardo will most likely cap his Skill and Resistance early on, as well as Luck toward the end of his Sniper class, if he can get that far. His HP, Strength and Defense will be average but his Speed will remain below average, weakening his overall offense as he will be unable to reliably Double Attack unless he uses the Brave Bow. Despite this problem, Leonardo gains a unique bow in Part 3 that only he can wield, the Lughnasadh, which grants him five more points Speed, in addition to having 16 might, improving his combat performance for the duration of Part 3 and Part 4 (however, this is not available in the Japanese versions of Radiant Dawn).

To patch up his Speed stat, the player can give him Bonus Experience after he naturally caps his Skill, Resistance, and Luck, use a Speedwing or he can grow it naturally if his other stats cap. He fares very well in his final class, should the player give the effort to promote him twice, he has the potential to be a very powerful unit while providing an excellent support with his Water affinity. Even with all this investment however, he will likely be outdone by Shinon in the end, who fares better in virtually all important stats, especially Speed, and requires much less babysitting than Leonardo.

All things considered, he is comparable to Ronan from Thracia 776: Decent bases, but incredibly lopsided growths, especially with their uncanny ability to get levelups in Magic when they don't require them. What makes Leonardo so unique, apart from the magic stat being split, is how he has even less HP at twice the level. Even Rolf in FE9 had 18 HP at Level 1. Like the rest of the units recruited in Part 1, Leonardo will fall off very, very quickly if not constantly trained, so be very careful when training him.

Freedom's Arrow (心正しき弓使い)
Leonardo toiled at rebuilding the army. With his proven skills and good looks, he was beset by women across Tellius.

Leonardo: You crushed freedom in Daein for years! Do you even have a conscience?!
Numida: Daein gutter trash! I should have had you all killed when I had the chance!

Leonardo is illustrated in the trading card game Fire Emblem Cipher with the following cards: 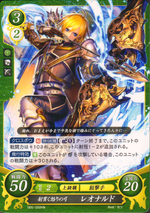 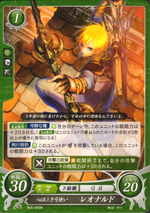 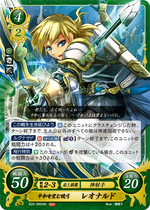 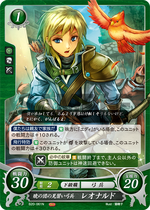