Lepus (フィーア Fīa, Vier in the Japanese version) is one of the twelve Deadlords, and appears in Fire Emblem: Genealogy of the Holy War and Fire Emblem Awakening.

In Fire Emblem: Genealogy of the Holy War, little is mentioned about the Deadlords, but they are all fought in the Final Chapter near Belhalla and eventually defeated, including Lepus herself. Lepus is not fought in Fire Emblem: Thracia 776.

As Lepus does not wield any weapons, she is thus the easiest Deadlord to defeat. However, she possesses a Reserve Staff, and should be killed before facing off against the other Deadlords, preventing her from healing her comrades.

The Deadlords' names are based on Latin words for the animals of the Chinese zodiac. The zodiac's fourth sign is the rabbit, which in Latin is cuniculus, but the game uses lepus instead, which is "hare."

Vier, Lepus' Japanese name, is the German and Dutch word for the number 4. 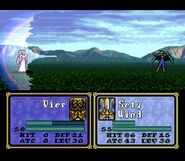 Sety attacking Lepus in Genealogy of the Holy War.