Arch Knight
[view]
“I see. Lana, we need to do our best out here for mother and our missing father. Someday we'll be able to return with mother to her hometown of Yngvi.”
—Lester

Lester is a playable character from Fire Emblem: Genealogy of the Holy War. He is the son of Edain and the older brother of Lana. He and his sister were raised in Isaach, and decide to assist in Seliph's liberation army. Lester bears minor Ullr blood, and is proficient with bows. His substitute character is Deimne.

Lester is the grandson of Lord Ring, the nephew of Brigid and Andrey, and cousin to Febail, Patty, and Scipio.

The location of Lester's birthplace is unknown, but it is possible that he was born in Silesse, much like most of the older siblings of his generation. When Sigurd instructs Oifey and Shannan to take Seliph to Isaach's safety, Edain also sends Lester with them, and rejoins them after the Battle of Belhalla.

Spending his time hiding in Tirnanog, Lester was taught the art of combat by Shannan and Oifey, and trained alongside Diarmuid, Larcei, Scáthach, and Seliph. When the empire finally discovers Seliph's location and begins invading Tirnanog, Lester is away with Diarmuid and Oifey, but they return in time to join the fray. Though Lester is initially worried about Lana participating in the battle, she explains to him that she would rather fight than stay in the abbey. After saying their farewells to their mother, they join the liberation war.

Having picked up a lot of responsibilities from Oifey, Lester follows in his footsteps by being responsible and cool-headed, and strategically-minded. He displays and air of maturity about him that's especially seen when he talks with Lana, as he tries to be protective of her before realizing that she can take care of herself. Lester also has a slightly playful and mischievous side, as seen in his conversations with Patty, where he teases her a few times.

As an Arch Knight with a Priest sister, Lester is one of the characters in Genealogy with the most restrictive parent setup. While he does have an A-rank in bows at base, his Iron Bow is not sufficient early armament. Lester is also one of the only two characters who can inherit bows at all, which provides another layer of difficulty; if Lester does not inherit his bows, then he will have to either scrounge them from shops or events, or borrow them from Febail. Additionally, his mother possesses no skills, and her growths are magically-oriented, meaning that Lester's base growths are very poorly distributed. Altogether, this means Lester desires a father with physically oriented growths, strong skills, preferably including Pursuit, and the ability to pass down bows.

The sole father who meets all the above qualifications is Midir. With Midir as a father, Lester will be a very strong unit in the early game, and remain worthwhile for the rest of the run. He is mounted, boasts entirely solid Strength, Speed, and durability, and can wield all the bows Midir was able to pass down, including the Brave Bow and Killer Bow. With Canto, Lester can easily take on enemies through hit-and-run attacks, sniping them with a fusillade of shots from the Hero Bow through Pursuit and Charge before retreating behind his allies to avoid enemy phase attacks. While he is not much for taking on the strongest bosses or swarms of enemies, Lester's ability to eliminate a chosen threat practically at will over a massive range will never go out of style, and he will easily kill any flier not possessing Nihil. Jamke can work as a substitute for Midir, and even has notably higher growths and Adept, but Lester will need the Pursuit Ring to make his offense reliable. While Midir does not benefit his sister Lana much, she does not need a good father, as she already inherits B-rank staves and her mother's reasonable growth rates.

Naturally, however, some players choose to focus more on Lana, whose best options for fathers are magically-oriented--preferably Claud, due to his ability to boost her staff rank and Magic significantly and pass down Rescue. If the player opts for a magical father, particularly Claud, Lester will be essentially useless. His Strength growth will be abysmal, he will have few if any skills to work with, and with only his Iron Bow at base, he will struggle to do more than scratch non-flier enemies. His offense will not become even slightly acceptable until he can obtain the Brave Bow in Chapter 8, and at every point, he will be one of your worst units. A magically-oriented Lester should probably be written off as a loss.

In Chapter 10, if neither Lester nor Patty has a lover, he may speak to her, and she will gain three points of HP and 100 love points with him.

Lester is illustrated in the trading card game with the following cards: 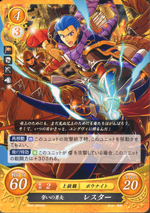 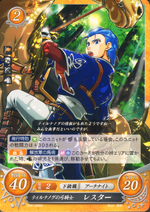