Kirsten Day
[view]
“Sure, I'll take you on. But it's going to hurt! When I fight, it's with claws out.”
—Lethe to Ike in a support conversation

Lethe is a playable character from Fire Emblem: Path of Radiance and Fire Emblem: Radiant Dawn. She is a Cat Laguz from the Beast tribe of Gallia. She is the leader of a small platoon of Gallian soldiers. Lethe has a younger twin sister named Lyre.

In Path of Radiance, if Lethe and Ranulf share an A rank in Support Conversations, Ranulf will offer Lethe the opportunity to return to Gallia, leaving Ike and the Crimean Liberation Army behind her. Lethe will then decline this offer, promising to defeat Ashnard alongside the Crimean Army.

Lethe appears as a boss in the Radiant Dawn chapter, A Reason to Fight, but the player will neither be required to fight nor defeat Lethe in order to advance through this chapter.

Fierce and agile, Lethe is known as one of the harshest characters in the Tellius series, with her honor and respect for her duty leading her to be an extremely intimidating figure, strictly adhereing to her role as a beast-tribe warrior and commander, often being strict on herself and others. Despite this very fact, Lethe does care for her comrades, as can be observed from the contents of her death quote.

Though she serves Caineghis and Ranulf, she does not share their belief of pursuing a policy of peaceful coexistence with the Beorc. Her fundamental disgust with human existence shows when she was tasked with leading Ike to Castle Gallia. She has had trouble trusting Beorc having studied the history of the Beorc and Laguz –where “humans” had exploited and enslaved the “sub-humans.” When Soren provoked her, the already tense emotions [she felt toward them] rapidly escalated. However, after witnessing how Ike had used himself as a shield to help dissolve the situation, she began to change her outlook having seen that not all Beorc are bad.

Her strong attitude can occasionally invite misunderstandings, and was the reason behind her and her sister Lyre not speaking to each other for a long time. It was not until they reunited in the Laguz Alliance where they reconciled. Despite those arguments, Lethe only desires for Lyre's safety, and she will always try to protect Lyre, even if she has to be mean to her.

In Part II, Lethe will be a pretty decent unit, although by no means the best. Her stats are decent all across the board, with very high Speed, yet has somewhat low growths and gains very low EXP from kills while transformed, making it hard for her to take off. As a Cat, Lethe's biggest disadvantage is her quick transformation times, meaning she can only stay in her transformed form for a few rounds, and keeping her transformed for longer periods of time will require heavy usage of Olivi Grass.

In Part III onward, she is still able to perform double attacks somewhat reliably due to her high Speed, but her other stats will prove to be a detriment to her. Lethe's Defense and Strength are low, meaning that she will most likely sustain large amounts damage, alongside inflicting low amounts of damage at the same time. It doesn't help that her availability doesn't match the Greil Mercenaries' either, that she gains only around 10 EXP at best on Normal Mode per kill in Part III on regular enemies, and that her untransformed bases don't allow her to deal damage at all for training purposes, resulting into a unit who is very difficult to grow. An Energy Drop might fix her damage output somewhat (effectively 4 points of Strength instead of 2), but after that, she will still struggle really hard to level up outside of getting help from Bonus EXP, and will always suffer from the ephemeral cats' transformation gauge.

Lethe is considered a one-and-done character; she contributes well in Part II for two chapters, but largely falls off by Part III, while still being usable for chip damage, but nothing beyond, unless privileged by the player.

Gallia's Valkyrie
A cat warrior from Gallia, the home of the beast tribe of laguz. Once had a distrust of all beorc, but that's slowly changing. Appears in Fire Emblem: Radiant Dawn.

“Ahhgrr! A terrible mistake... I must be allowed to withdraw. All of you, live to fight again!”
—Retreat quote

"I can't believe I'm doing this, but... I must admit that you've done well. You were a good fighter. Too good to leave with these beorc. We'll meet again."

Lethe is illustrated in the trading card game Fire Emblem Cipher with the following cards: 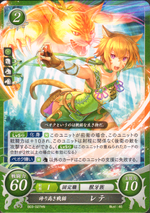 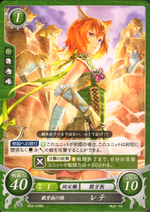 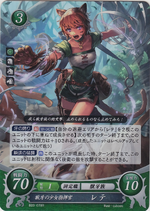 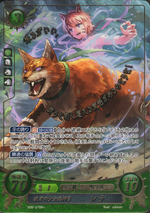 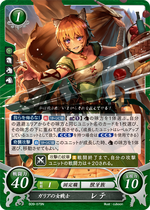 In Greek mythology, Lethe was one of the five rivers of Hades. Those who drink from it will forget their past lives. Lethe was also the name of the Greek spirit of forgetfulness and oblivion, with whom the river was often identified.