Lewyn is a playable character from Fire Emblem: Genealogy of the Holy War. He is the prince of Silesse and the son of Queen Rahna. He is also a direct descendant of Crusader Ced, the founder of Silesse. Lewyn is 20 years old, according to the Mitsuki Oosawa manga.

Lewyn, like many foot units, is an excellent overall combat unit. He sports a very high Speed growth which will give him excellent Evasion, and despite the fact that he does not have Pursuit, he is still a ridiculously strong offensive unit. While his overall offensive potential is extremely high, Lewyn does have a few drawbacks. The first being his low Movement, making it difficult to have him see much actual combat. Maps in Genealogy of the Holy War are huge, and Lewyn will have trouble keeping up. The other drawback is having the most inconsistent damage output in the game. The possible outcomes from him engaging in combat range from simply attacking once and not even managing to kill a regular enemy unit, or he may blow up a Boss with a barrage of 4 attacks full of critical strikes. This is because Lewyn's skills, Adept and Critical, are inconsistent.

To be specific, Lewyn's chance to Critical enemies is Skill based, so he starts with a 12% chance to activate it. Once he reaches ~20 Skill, it should begin to be much more relevant. Adept is an extremely good fit for Lewyn, because the skill activates based on adjusted Speed. Lewyn starts off with a high Speed of 16, and has an amazing 90% growth in it. On top of this, Lewyn specializes in Wind tomes, which are the best in Genealogy of the Holy War due to their very low Weight while maintaining the same Might as other schools of Magic. Meaning Lewyn loses very little Speed wielding them. In particular, he begins with a powerful Elwind tome that only has a Weight of 2. Meaning he starts with a 34% chance of activating Adept at his base level, and it will slowly get better with time where with capped Speed, he will have a 50% chance of activating it. This does not count possible bonuses from weapons or rings. Even more impressive is that Adept can trigger multiple times consecutively, meaning that Lewyn is perfectly capable of stringing together a barrage of attacks, some of which may Critical. All of that combined means that though Lewyn has inconsistent damage output, the overall expected result is actually quite good. If you want Lewyn to be even stronger (which is wholly unnecessary), you could sell him the Pursuit Ring, but there are many characters that need the item more than Lewyn.

In Chapter 4, Lewyn will receive the Forseti tome from his mother, Queen Rahna, when he enters Silesse Castle, and it is at this moment that he will become virtually unstoppable. He gains an additional 10 Skill and 20 Speed while equipping the tome, giving him roughly 100 Evade, a 65% chance of activating Adept, roughly 35% chance to Critical, and an absurdly strong attack strength of 50-60. He can slay even Holy Weapon wielding Bosses with relative ease.

Lewyn is best paired with Erinys or Tailtiu. Sylvia is a pretty good pairing. While there are some benefits for other pairings, the rest should generally be avoided because no other children can inherit Forseti, Lewyn cannot pass on weapons to them, they will lack Pursuit, or his low Strength growth will negatively impact the children. If you must defy this recommendation, Ayra is the best option, especially if you have them pass down Magic Swords to the children and have one of the children buy then Flame Sword, however compared to many other of Ayra's parings this may be unreliable

In terms of raw damage output, Lewyn is the strongest green mage in the game. His starting base kit is among the best in the entire game, requiring virtually no outside inheritance to be competitively viable. This is cemented through his claim-to-fame Forseti which guarantees an immediate follow up attack to his first attack so long as he initiates battle and is over 50% health at the start. Lewyn melts through a wide range of units save for magically bulkiest of enemies and emerges from most battles without suffering any damage and maintaining Forseti's effect.

Lewyn is far too delicate and is at his weakest during the Enemy turn. He absolutely wants to avoid being initiated on all circumstances. Bulky units with Distant Counter are particularly troublesome for him as they can retaliate hard if he fails to kill them, especially red units like Hríd, Ryoma, and Black Knight. Highly resistant red enemies like Katarina, Arvis, and Sanaki can withstand his offense and retaliate hard. Finally, his reliance on his tome's follow up attack leaves him vulnerable to Wary Fighter opponents. 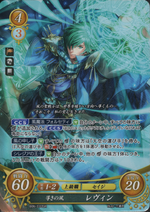 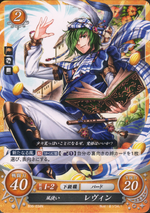 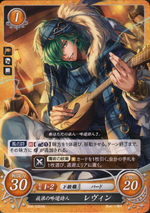 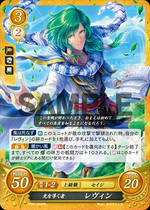 Levin's official translated name 'Lewyn' is of Anglo-Saxon origin and derives from the Old English pre 7th Century personal name "Leofwine", which is composed of the elements "leof", dear, beloved and "wine", friend. This possibly reflects his friendship with Erinys and Annand from childhood, but could also reflect on his friendship with the army in general.