Nazeeh Tarsha
[view]
“No offense, sir, but my father can’t stand yours. No way in hell he’d consent to me helping the Chalphy's. I’m here by my own reckoning. Sir, just so you know… I’m not here for your little mission. Azelle's just a good bud of mine.”
—Lex to Sigurd in Genealogy of the Holy War

Lex (Rex in the Super Tactics Book) is a character from Fire Emblem: Genealogy of the Holy War. He is the youngest son of Lombard, the duke of Dozel, and the half-brother of Danann. He possesses minor Nál blood and is widely regarded to be a rebel to his family's name. He is a childhood friend of both Azelle and Tailtiu.

Lex is 18 years old, as revealed in the Mitsuki Oosawa manga.

He first appears in the Prologue alongside Azelle in the northern area. Azelle joined Sigurd's army to find Lady Edain and Lex followed, but his only reason for doing so is that he wants to help his friend. He is hot-headed and loves to fight. In Chapter 1, he can wait on an edge of a peninsula to receive a Brave Axe from a mysterious woman of unknown origins.

Lex will eventually perish in the Battle of Belhalla, alongside a good number of his fellow comrades.

A childhood friend of Azelle, Lex is depicted as being a staunchly loyal and brotherly character who enjoys teasing his friends and comrades. Lex is also enthusiastic about battle and is willing to risk his life to help Azelle even if he teases him for his childhood crushes. Despite his close ties to his friends, his kinship doesn't extend to his actual family, who he tries hard to avoid. Lex is uncomfortable around most of House Dozel, especially his father due to his power-hungry and war-mongering nature, causing him to adopt a more rebellious personality and abandon his homeland.

Ultimately this means that Lex has no problems with the idea that somebody can drop everything in their life and leave it all behind, even family ties as he tells Azelle in Chapter 5, and he often uses his laidback nature to avoid the problems in his family life which eventually results in him not caring about having to kill his father.

Lex also has a habit of being somewhat crass and blunt at times, telling Sigurd to his face that he doesn't really care about his mission and is only interested in helping his friends, and casually leaving after flustering the usually stoic Ayra with his gift of a Brave Sword. In relation to this, he's also shown to be somewhat fond of the stubbornness of people like Ayra.

Lex is the only character in the first generation who is able to wield Axes before promotion. He comes to you in the Prologue with the Elite skill, allowing him to skyrocket in levels and become imposing through sheer level advantage. Even with minimal investment, he will easily outlevel the rest of the army, often promoting as early as Chapter 2. Lex will start out a bit awkward as most early enemy units wield axes, and they will have a much greater chance of hitting Lex than most of the other units you start with. Luckily, Lex is durable enough to take several hits even from these hard hitting axe users, but he will likely need a healer keeping an eye on him early on. Since he lacks Pursuit and will have to wait until the end of Chapter 1 to obtain the Brave Axe, he initially will not be very threatening. However, by Chapter 2 he will hit his stride and start tearing through enemies with his Brave Axe. Synergizing particularly well with this is his Vantage skill, which ensures that on low health, he will strike opponents twice with his Brave Axe before they can hit him, making him largely invulnerable in melee.

Lex's main weaknesses are twofold. First, his growths bar Defense range from nothing special to outright bad. His rapid level lead can stave off the issue, but as enemies and allies grow more powerful, he tends to lose his lead, especially when other Brave weapons become available. Second, Lex is locked to using axes, which are exceptionally heavy, giving him very little Avoid. While his high Defense will let him ward off most physical attackers, Lex is extremely poor at handling magic attackers, who can strike him outside of his range with excellent accuracy. This tends to be a particular problem in Chapters 4 and 5, which feature larger numbers of magic-based enemies.

In Ranked runs, players should take some care not to have Lex become an EXP hog. EXP is a very precious commodity in the first generation, and Lex has a tendency to quickly rise in levels, wasting EXP that could have been distributed to harder-to-train units.

Lex makes a great father that can pair well with any female in the first generation, but he comes with a few downsides. He has Holy Blood that will give his children great durability, and his stats generally compliment very well with most mothers making the children strong and durable. He passes the amazing Elite skill down to his children, as well as Vantage, but unfortunately lacks Pursuit which weakens his pairing potential. His main downside is that Lex will never be able to pass on any weaponry(barring obtaining items from slain bosses that he cannot use solely to pass onto his children), as no children can inherit axes.

Lex is best paired with Ayra, Brigid, or Tailtiu. Erinys, Lachesis, Sylvia, and Edain are all solid choices. There is no real bad choice for Lex as his stats and Elite skill ensure even Mage-type children will turn out respectable, but some precautions may need to be taken with Lex's inventory to ensure his children wind up the best they can be, where you will likely want to consider having him hang onto some swords, the Magic Ring, or the Pursuit Ring to ensure his children turn out well.

In the Prologue, Lex may speak to Sigurd, but nothing will result of it.

In Chapter 1, if Lex waits on a certain spot, he will receive the Brave Axe if he has an Iron Axe in his inventory.

In Chapter 3, if neither Lex nor Ayra has a lover, he may speak to her, resulting in her receiving the Brave Sword and 100 love points with him.

In Chapter 5, after Lubeck Castle is captured, Lex may speak to Azelle, but nothing will result of it.

In Chapter 5, if Tailtiu/Ayra and Lex are lovers, she may speak to him, but nothing will result of it.

Young Blade
Second son of Duke Lombard of House Dozel. Joins the army under Sigurd's command along with his friend Azelle. Appears in Fire Emblem: Genealogy of the Holy War.

Lex is a great unit with his personal weapon, the Goddess Axe, that allows him to strike twice in a row during the player phase AND enemy phase. The Goddess Axe also gives Lex +5 Defense, increasing his base physical bulk to a massive 88. All of this power does come at a cost of -5 Speed and Resistance, making him vulnerable to strong red tome and speedy green tome units.

His Assist Skill is Reposition, a positional assist skill that moves the target ally to the other side of Lex. This skill can be used to move an ally away from danger, move an ally toward the enemy, or move an ally out of the way to allow Lex to face the enemies.

In his A slot, Lex has Atk/Def Push, which grants +7 Attack and Defense while over 25% HP, but inflicts 5 damage on the unit after combat. This skill adds to Lex's bulk and power, essentially granting +14 damage with his personal brave weapon, but can soften him up to be killed off during the enemy phase.

Finally, in his C Slot, Lex has Axe Experience, which doubles the amount of EXP that axe units obtain while Lex is alive. This skill is useful for training Lex and fellow axe-wielders.

Lex is an axe unit with mediocre Speed and low Resistance, making him weak to red mages, such as Arvis, Lysithea, and Male Morgan. Lex is also susceptible to skills and weapons that prevent him from counterattacking, such as Dazzling Staff, Firesweep weapons, and Windsweep.

Lex lacks a Special skill in his base kit, so he will have to inherit one. If you plan on making him an enemy-phase killing machine, Bonfire will suit your fancy, but if you want Lex to be a self-sustaining tank, Noontime or Sol are choices to consider. Distant Counter will increase Lex's effectiveness, allowing him to counterattack bow, tome, and dagger units. Vantage has great synergy with his personal weapon, allowing him to strike two times in a row before the enemy can land a hit on him during the enemy phase. Attack Smoke and Defense Smoke are great C Slot skills for Lex, decreasing the attack or defense of nearby enemies after combat. Atk/Def Solo is a great Sacred Seal for Lex to have. It increases his Attack and Defense by 6 while Lex is not adjacent to an ally, and because Lex will often be by himself, tanking and dishing out attacks during the enemy phase.

His role is similar to the game, but a bit expanded. Lex joins Sigurd's army along with Azelle to help rescue Edain. After facing Ayra in battle, the two start having a bit of a rocky relationship since both are reluctant to admit their feelings to the other, though it eventually dissipates when they actually get closer.

Unlike in the game, Lex survives the Battle of Belhalla and goes to Isaach some time afterwards along with Ayra, but while Danann initially welcomes them, he turns on them after being handed over the Helswath and executes Lex for treason.

Lex is illustrated in the trading card game Fire Emblem Cipher with the following cards: 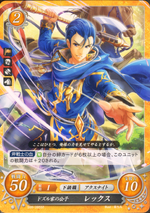 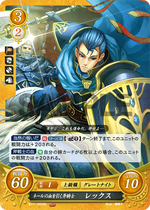 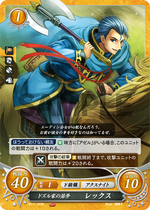 Lex is the short form of the name Alexander, a name often attributed to Alexander the Great. Rexis a name derived from Latin, meaning "king".