Erica Mendez
[view]
Lianna is a main character and a protagonist in Fire Emblem Warriors. She is a princess of the Aytolis Kingdom, the daughter of Queen Yelena and the older twin sister of prince Rowan.

Lianna has no desire to inherit the throne but rather encourages her twin brother to inherit it and become king.

She dearly loves her more hotheaded brother, Rowan, but also often quarrels with him due to her preference of using a more level-headed approach to problems.

Lianna is clever and understands her own faults. She is also seen to have a high regard for manners and correct behavior, putting a lot of emphasis upon behaving as a royal should.

She is rather naive to the ways of relationships and political maneuvering, as shown by her shock when she realized that rulers could take multiple spouses, and her disbelief of how they competed for the chance to have their children be the heirs to the Nohrian throne.

As revealed in her support with Ryoma, Lianna tends to analyze every situation to find a good plan of action, while her brother tends to rush into battles. She does not think highly of her habit of planning, believing that she overthinks things too much and instead admiring Rowan and Chrom for their instinctive responses to danger.

Lianna is shown as being open-minded and receptive to the problems of others, due to her ability to easily sympathize with them. This further helps her give good advice, such as when she suggested that Caeda be honest about her own feelings.

Occasionally, Lianna doubts her own abilities, and this causes her to try to hide her feelings of physical and emotional pain in order to stop feeling "like a burden." It also causes her to second-guess her decisions. Her low self-esteem connects to her want to have Rowan become the future king of Aytolis, as she believes that she does not have the right qualities to become queen.

If Lianna is chosen as Main Lord

If Rowan is chosen as Main Lord

Lianna is illustrated in the trading card game with the following cards: 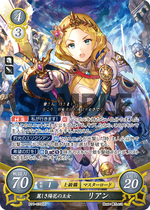 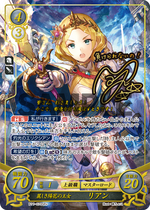 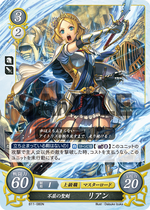 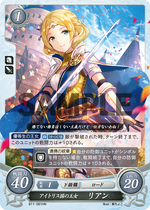 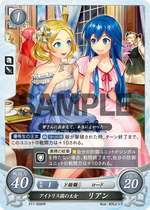