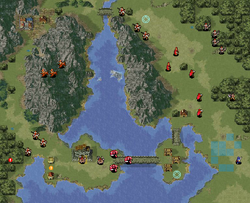 Chapter script
[view]
“The shocking news brought by Caeda was a terrible blow to Marth. Hardin was once not only a comrade-in-arms, but a trusted confidant and irreplaceable friend. "Yet… why attack Altea? What have I done wrong?" Filled with frustration, Marth hurried his return to his homeland, but the first barrier stood in his way: Olbern Keep, headquarters of the Grustian Occupation Army led by the evil General Lang… also known as the "Nest of Evil."”
—Opening Narration, New Mystery of the Emblem
“Following Caeda's disturbing news, Marth suffered a terrible blow. Hardin was once a companion in battle, and an irreplaceable friend. "But why...? Why has he attacked Altea? What have I done wrong?" Filled with lament, Marth, before hurrying back to his homeland, was faced with his first challenge. Led by the corrupt General Lang, Grust's occupation army was based at Olbern Castle. Its nickname was the "Nest of Vice".”
—Opening Narration, Mystery of the Emblem

Liberation of Grust is Chapter 5 of Fire Emblem: Mystery of the Emblem and its remake.

There are Snipers in Jeorge's group. Do not attack them because they will kill you (or worse, you'll kill Jeorge, who is essential). You cannot recruit Jeorge yet, wait until Chapter 8. Also it is essential that you have Julian start in the upperleft most starting space so that Julian can immediately talk to Rickard.

After dealing with enemy Mages, Cavaliers and Thieves to the north, it is time to invade the enemy castle by going through the bridge. Keep fliers away from ballistae range unless they dismount or wield Iote's Shield (both options only possible in the original game). Hold the chokepoint with a high Defense unit like Draug and Arran and slowly whittle the enemy numbers before striking the Ballisticians.

The Village to the Northwest will give Marth a Hammerne staff. Be sure to send a Cavalier or Pegasus Knight after the Thief holding the Master Seal. He flees the stage at around turn 5-6.

In Mystery of the Emblem, there is an Arena located in between an Armory and a Vendor near the castle.

In New Mystery of the Emblem, the mountain pass leading to the Hammerne house is made wider and the terrain is easier for non-fliers like Marth to traverse through. This change is a double-edged sword, as this will also allow enemy Thief reinforcements to reach the house faster. 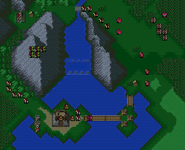