Libra is a saint and war monk of Ylisse with a calm and composed nature; he joined the clergy after a painful life of neglect due to being abandoned by his parents. Even though he is often mistaken for a woman due to his androgynous appearance, Virion discovers he is a man with a masculine side to him, as Virion tends to pay attention to the tiniest details. Being of religious nature, Libra often prays to the gods more than anyone in Chrom's group. His birthday is July 1st.

After the war, Libra builds an orphanage and watches over the children there for many years. He is courted by many women and men and is said to be the incarnation of Naga 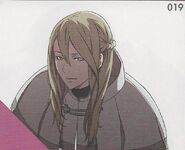