Chapter 3: The Gate of Kelves

Alan Adelberg
[view]
“Perne: You haven't changed at all since you were a kid, have you? Have you at least learned not to wet your bed?!
Lifis: C-Come on, Perne... That was a long time ago.”
—Perne and Lifis talking

Lifis is a playable character in Fire Emblem: Thracia 776. He is the 25-year-old leader of the Lifis Pirates, a group who wreaks havoc on the eastern coasts of Thracia.

Lifis is first named in Chapter 2, where he is identified as the leader of the pirates responsible for attacking the villages lining the eastern coasts of Thracia.

Should Leif and the Freeblades of Fiana succeed in saving all the houses in this chapter, they will launch an investigation into Lifis and his pirates, traveling to their island in Chapter 2x to lay siege to their hideout.

Lifis makes his first appearance in Chapter 2x, which opens on him reaching an agreement with the Tahran priestess Safy. In exchange for Safy becoming his wife, Lifis lies about agreeing to fight for the people of Tahra. He then proceeds to spearhead the defense against the Freeblades of Fiana' assault, but is eventually defeated and captured.

Initially planned to be turned over to the villagers whom he had terrorized, he is saved on Safy's behest. Lifis subsequently joins the Freeblades of Fiana, although he fully intends to escape and also turn Leif over to Loptous when the chance presents itself.

When Leif and Eyvel are later captured by Raydrik in Chapter 3, Lifis is apprehended alongside them.

Imprisoned alongside two bandits in the dungeons of Munster in Chapter 4, Lifis strikes up a deal with them, using his credentials as a famous bandit to trick them into pledging their loyalty to him. He is eventually freed from imprisonment when members of the Magi Squad storm the dungeons to break Leif out of jail. Continuing to accompany Leif, Lifis will join up with the Freeblades of Fiana again.

When Leif's army later passes through Dakia Forest and defeats Colho and Salem in Chapter 12, they discover the hideout of Perne's gang of bandits.

If Lifis is chosen to infiltrate the hideout in Chapter 12x, the chapter will open on him expressing discomfort and reluctance to enter the place, stating that there is a man whom he does not want to meet. This man turns out to be Perne, a conversation shared between the two revealing that they had grown up in the same village. Despite being teased for his bed-wetting habit, Lifis is able to convince Perne to join Leif's cause.

Lifis then goes on to continue supporting Leif in his cause to liberate Northern Thracia from the Grannvale Empire. Earning a government post after the war, Lifis is credited for leading the Kelves Garrison Forces to wipe out the pirate outposts surrounding Thracia. He is said to disappear without a trace thereafter.

If Lifis dies or is not recruited, he will become the Deadlord Porcus.

Though introduced as a callous man with both bravado and genuine thieving skills as the leader of a pirate gang, Lifis is, in reality, a cowardly person. He lies to protect himself, and uses this same brand of deceit to keep himself out of battle and even to win the affections of Safy.

Lifis is the first thief that you get, and in Thracia 776, it is important to raise his Build. It is thus best to first obtain the Nál Scroll before leveling him up.

Lifis is most useful in Chapter 3, where his fairly decent Build lets him steal magic tomes from the many enemy mages. This is unlike Lara, whose low Build hinders her stealing capabilities. In Chapter 7, Lifis can also be used to steal a couple of Rapiers - a very versatile sword - from the enemy Cavaliers.

Although Lifis is faster than most units, his Speed growth falls well below what is expected of a thief, and he may fail to reach the 13 Speed necessary to steal the Ambush Manual from Colho in Chapter 12. Giving him the Ced scroll (and possibly the Baldr scroll alongside it) for two or three levels should be all he needs to overcome this.

Lifis is not a great combat unit with a Follow-up Critical Multiplier of 0. Along with bad Luck and Defense, do not expect him to be able to annihilate hordes of enemies. Be careful against long-range magic users and Ballistae, as they will be able to easily take him out. Without scrolls to buff his growth, he will also be particularly vulnerable to critical attacks because of his poor Luck (although you can make Lifis immune to criticals by giving him any scroll, but his avoid and hit rates will still be affected by luck).

As soon as you get your hands on the Elite Sword, it is advised to level him up with the Nál Scroll in his inventory to boost his Build. This way, he will be able to steal many useful weapons in the subsequent chapters, including two of Fred's Levin Swords, and a copy of Dire Thunder from Olwen, all of which are otherwise impossible to obtain. Stealing will also instantly disable enemy units, making the overall battle much easier to handles.

Terror of Iz
Leader of the Lifis Pirates, who ply the waters off the coast of Iz. He has come to the pirate festival after having a change of heart. Appears in Fire Emblem: Thracia 776.

“H-Hey, wait a minute! I ain't that bad, really! Maybe I been wrong here and there, but not enough to deserve this!”
—Lifis's battle quote
“Much obliged, moron. Ah, looks like I gotta build things up from scratch now...”
—Lifis's release quote

"Lifis was one of the many to earn a post as a government official, and served as one for a short time before vanishing. During his time in office, the Kerberos garrison wiped out the pirates still hiding in the Corsair Isles and other nearby islands. After that resounding victory, Lifis simply disappeared from the pages of history."

Lifis is illustrated in the trading card game with the following cards: 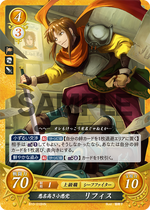 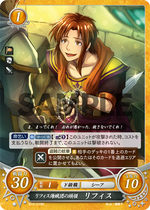