The Light Brand (光の剣, Hikari no Tsurugi lit. Light Sword in the Japanese versions) is a recurring magic sword in the series. It has the ability to perform ranged attacks, which are treated as light-based magic attacks (the spell animation is the same as the Light Tome Lightning), as well as direct attacks, which are treated as regular physical attacks. It is analogous to the Anima Wind Sword and the Dark Runesword, although it doesn't have any other side-effects like the other two do.

The Light Sword, as it appears in the second series of the TCG. 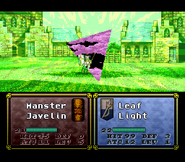 Leif casting Lightning on an enemy Soldier with the Light Sword in Thracia 776.