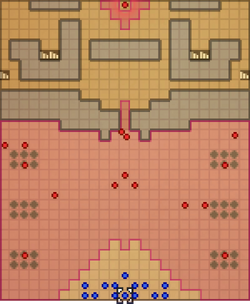 Daniela (Must be captured)

Chapter script
[view]
“Corrin and his/her group at last reconnect with Ryoma in Cheve. Reunited, everyone pledges to combine their efforts and try to restore peace to the world.”
—Opening Narration

Light Scatters (柔く光り散りて Yawaku hikari chirite, lit A Soft Light Scatters in the Japanese version) is Chapter 14 of Fire Emblem Fates in the Birthright Version. This chapter takes place in the Border Walls.

This is the first chapter where Ryoma is a full-fledged member of your party.

Your units are placed outside one of Nohr's border gates. The army present outside the fortress is actually only about half of the force you face, as a horde of reinforcements will quickly spawn within the fortress before the player can enter.

The opposing force is not that heavy in Normal Mode (consult map above), but on Hard and Lunatic, the amount of enemies outside the walls are massively increased with more groups of Cavaliers commanded by Paladins along with a good amount of Nohrian enemies.

The fort entrance is blocked by Benny and Charlotte, both in Guard Stance. Benny is static and carries both a Beast Killer and Javelin; Charlotte only carries a Steel Axe. Charlotte can move, but will only do so when Benny is defeated. As Benny starts off with a Beast Killer, do not have a horse, kitsune, or pegasus mounted unit fight him, as he will easily destroy them in one hit due to the bonus damage it provides. Despite this, both of them are very easy to overcome.

After a unit nears the fort or the guards outside are dwindling, a massive group of Nohrians will appear in the fort. This group consists of a few Generals, Berserkers and a Hero, along with Fighters, Outlaws and Knights. However, this group can be easily defeated with the Dragon Veins, in which there are three of them. When used, rocks will fall on the enemy and deal 10 damage onto them (it will not kill them outright). When all are used, it weakens up all the units for your weaker units to kill them and gain massive experience. Daniela will also be weakened by them and as a result, can be easily killed or captured, even with an untrained Orochi provided that she gets magic and skill boosts in addition to having four units next to her for an accuracy bonus.

Alternatively, players can simply use Ryoma to beat the chapter, although this is only feasible on Normal Mode.