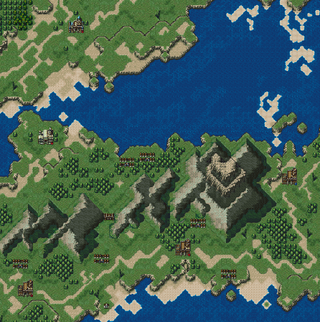 Chapter script
[view]
“With Thracia's downfall, Seliph sets his sights on his final destination: Grannvale. His route to the Empire takes him through the Miletos District, a collective of free cities which was once a vibrant and wealthy hub of commerce for all of Jugdral. Now, though, only a dying land choked by the Empire and Loptr Church lies before Seliph. At Chronos Castle, the seemingly mad rule of Queen Hilda has condemned countless citizens to savage, merciless deaths. And in the Rados region, Bishop Morigan, under the command of Archbishop Manfroy, conducts child hunt after child hunt. Wealth. Liberty. Hope. Even life itself... All crumbled through the people's fingers. As the evil cult plies its sacrificial rituals and pile the bodies of their victims even higher, Seliph knows he cannot leave Miletos be. Greeted by raucous cheers from the people, the liberation army routed the Empire's men, freeing the city of Peruluke. The hope of Miletos had slowly been rotting away in the Empire's hands, but at long last, the arrival of Seliph and his liberation army breathes new life into the nation's future.”
—Opening Narration

Light and Dark is Chapter 10 of Fire Emblem: Genealogy of the Holy War. Seliph must fight his way through Miletos with a weak sword, then claim the stronger Tyrfing sword, and defeat Arvis, thus avenging the death of his father Sigurd from seventeen years ago and clearing his name.

From the start this level can be difficult without adequate preparation: Tyrfing cannot be obtained until late and Seliph will be at a disadvantage against magic users until then. Make sure to bring at least one person with the restore staff as the map is full of enemies wielding Sleep staves. If the player failed to obtain the Tyrfing with Sigurd during Generation 1, Seliph will have to spend serious gold to repair it.

There are numerous dark mages with Hel, which automatically lowers the hit points of a unit to one. Make sure to bring a flying unit to help deal with enemies using sleep staves or Fenrir, as well as to intercept the thief moving to destroy the far western town that holds the valuable Magic Ring.

The gate leading to Miletos opens as soon as Rados castle is captured, so the player should act according to his/her strategy. If the player decides to position units near the gate in order to create a choke point or to deal with the thieves who destroy the two northern towns, he/she should be careful not to be in range of the enemy mages and bishops who wield sleep staves.

Another major barrier to capturing Miletos is the presence of Julius and Ishtar. Both will leave if one either dies or kills one of the player's units. The player will have to be mindful of Julius's range (since he possesses the Leg Ring) should the sacrifice of a unit be unwanted. Though Julius possesses greater range, he is harder to defeat, though by no means is the feat impossible. Fortunately, Ishtar will follow him if he moves. One way to defeat the two is to position a unit possessing high speed and resistance within Julius's range but out of Ishtar's. Ishtar will follow Julius, where she may be finished off by the player's units who are close enough to engage her but still outside Julius's range.

The bridge crossing into Chalphy will open as soon as Miletos is captured, so the player should act accordingly, though it is suggested to quickly deal with the enemies in Chalphy in order to rescue Palmark, who will give Seliph Tyrfing. One way to intercept the dark mages advancing on Palmark is to position flying units near the border between Chalphy and Miletos prior to seizing Miletos. By the time the player gets Tyrfing in Seliph's possession, Arvis will be the only enemy magic user remaining.

If the player wishes to witness an emotional scene (and give Seliph the Life Ring), then Seliph must land the finishing blow on Arvis, then position Seliph next to any body of water.