Fire Emblem Wiki
Register
Don't have an account?
Sign In
Advertisement
in: Stubs, New Mystery of the Emblem chapters

竜の祭壇 (Mystery of the Emblem)

光と影 (New Mystery of the Emblem)

Defeat Boss then Seize (Mystery of the Emblem)

Chapter script
[view]
“Thus, the long, tragic battle that would later be called the 'War of Heroes' finally came to an end. The seven kingdoms were unified under Prince Marth of Altea, and as the United Kingdom of Archanea was established, an era of peace began. The tales of the heroes who took part in this war brought excitement and tears to the later generations. Chronicles of the Archanean War of Heroes... This is a story of love and courage, about the young warriors who fought with the continent's fate at stake...”
—Closing Narration

The enemies in this chapter are Medeus as well as Earth Dragons, which are instantly banished by the Binding Shield, but Medeus is also protected by Lena, Maria, Nyna, and Elice, making surviving and recruiting all units difficult.

In New Mystery of the Emblem, the map is also filled with other types of dragons encountered in the game. They are not affected by the Binding Shield.

Medeus has a Speed stat of 30, meaning he doubles anything not a Sniper, Horseman, Berserker, Swordmaster, Thief or Speed-Capped Marth with the Binding Shield. Everything else dies in a single round of combat as Medeus will 2HKO anything you send at him (the only way a unit can survive getting doubled is by dodging or a female Sage with capped HP, Magic, Defense and a Nosferatu that is forged to have at least +3 might or deals a critical with Nosferatu) thanks to his 60 attack.

Currently, if you don't want any character die, you have to use Marth with Falchion. His Speed MUST be capped, also other stats except Magic and Resistance need to be high. One Again staff (at least 2 uses) is required.

Marth must land a crit (not counting the finishing blow when Medeus's health is low, as it has to be a critical hit). After Medeus is weakened enough, if Marth ended his turn, other characters can finish the job.

Reinforcements, all dragons of different kinds, will spawn from the altars surrounding Medeus. However, the Earth Dragons will immediately be banished upon the Player Phase due to the Binding Shield.

All recruitable characters in this chapter are weak, low level Bishops. They need to be taken to safety immediately. A Rescue Staff can come in handy if you have one. Should one be left unrecruited, Medeus will devour that Bishop to fully recover his HP, so be fast. There is no way to reclass them and change the advantage. 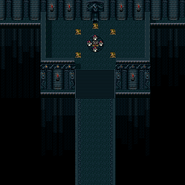 Chapter 24, as appeared from Mystery of the Emblem.