Chapter 1: Dawn of Destiny (joins in Chapter 8: The Reunion, The Binding Blade)

Julie Kliewer
[view]
“I may not know how to govern yet, but I'll learn. I will make Ostia a land where our children can live in happiness.”
—Lilina in a support conversation with Ogier in The Binding Blade

Lilina's deceased mother is never mentioned in name during The Binding Blade. She is deliberately left ambiguous, as Hector has four potential wives (Florina, Lyndis, Farina, or an unknown woman) depending on which supports he gained in The Blazing Blade or if he had any supports at all.

During the events of The Blazing Blade, if Hector supports Eliwood, Hector explains that he had a dream of an older version of himself with a young, blue haired girl. Eliwood believes that Hector has caught a glimpse of his future self.

At the end of his story, Hector summons Mark shortly before his coronation as Marquess of Ostia. He and his wife announce that they wish for Mark to be their future child's godparent and requests a name. While Hector desires a boy to clash with Eliwood's future son, his wife asks for a girl's name just in case. Hector would eventually be blessed with a daughter, whom he used Mark's suggested name, Lilina.

Fifteen years after the events of The Blazing Blade, Eliwood travels to Ostia to speak with Hector about the recent unrest in Bern regarding the attempted assassination of prince Zephiel. Lilina would meet Lord Eliwood for the first time and also become acquained with his son Roy whom Eliwood had brought along. Though shy at first, the two strike up an immediate friendship and go off to play while their father's continue to discuss the discord in Bern.

Years later, she and Roy studied in Ostia under the tutelage of the Mage General Cecilia. Lilina was very good in magic while Roy was not, so Cecilia trained Roy as a swordsman and Lilina as a mage. In this time too, Lilina seemed more mature than Roy (mentioned in a support conversation).

In The Binding Blade, Roy was studying in Ostia when he is called home by his sickly father Eliwood. When Roy gets to Pherae, he finds that his home was being attacked by bandits. He manages to stop the bandits, rescuing his father and Lilina, who was visiting Pherae.

Lilina is very kindhearted, outgoing, compassionate, and charismatic, not judging people for their skills, origins, or looks. On the other hand, she is also childish, stubborn, and naive to the point of being slightly detached from reality (mentioned in some supports, like those with Garret and Ogier). Lilina herself is quite aware of her flaws, though, and she works very hard to become a good leader like her deceased father, Hector.

Description: The daughter of Marquess Ostia. Gentle and kind-hearted.

While boasting a very high Magic growth, Lilina joins at a low level and facing competition for the Chapter 8 Guiding Ring, with the next one appearing in Chapter 14. Lugh, who joins earlier, has similarly low bases with a higher emphasis on Speed and more time for investment. One thing to note is that she has a fast support growth with Roy which grants her important +3 Attack and +15 Accuracy/Critical bonuses. This gives her a niche wielding Bolting tomes later in the game thanks to her high damage output and the possibility of doubling some of the slower enemies thanks to its relatively lower weight in this game. In all, Lilina is a growth unit who joins under-leveled with low base stats at a time when many units should be around Level 10+. She also takes time and effort to train due to her frailty and also because the difficulty is past level 1 at this point.

Delightful Noble
A noble of Ostia with a natural gift for magic. Roy's friend since childhood. Appears in Fire Emblem: The Binding Blade.

Lilina performs similar to her original Binding Blade with an impressively high base Atk stat of 37 with a neutral IV on it, allowing her to launch powerful attacks. Unfortunately, she lacks the speed needed to double attack enemies, forcing her to rely on one singularly powerful attack.

She does have a respectable Res stat as well, letting her duel mages, but her Def leaves her vulnerable to physical assaults. During the first year of Heroes, Lilina was a subpar mage. Her starting skill set also does little for her, making her rely on outside skill inheritance to make her viable. Her original weapon was Bolganone which was a decently powerful tome, but it lacks special effects. Lilina was blessed to later on receive a new Legendary Weapon in the form of Forblaze a new powerful tome with a Chill Resistance effect, allowing her to better dispatch high Res threats. It also came with a Refine, giving her a Death Blow 3 effect, making her initiations even more powerful and can stack on an inherited Death Blow, leading to even higher nuking potential.

Growing Flame was a decently powerful AoE special that let her damage enemies with unresisted damage to enemies around her target when the skill activated. Attack +3 gave her a flat 3 damage boost to her Attack, but it lacks longterm viability. Spur Attack is a decent supporting Skill C, but other skills are better suited for Lilina.

Lilina's Spd and Def creates her biggest weakness. She cannot survive any form of physical assaults aside from a few Green units. Great Blue mages like Delthea, Lute, and Micaiah easily survive her attacks and deals with her easily while Reinhardt can plow through her with Dire Thunder. Distant Counter weapon users like Fjorm, Camus, and Fallen Hardin also easily take her attacks and retaliates. Lastly, certain red units can deal with her if she is unable to finish them. Both forms of Tharja, Ryoma, Young Tiki are good Red units that can duel her and defeat her if she is unable to take care of them.

Lilina is best built to be a Player Turn character. Given that Forblaze has Death Blow built into it, she can also run Death Blow in her Skill A slot, granting her a +14 Atk when she initiates, bringing her lowest possible Atk with a bane to 62 Atk on initiation and 68 with a Boon. Her high Atk stats makes her an excellent candidate for Draconic Aura as it scales with her impressive attack, though Iceberg also works if working with a Res Boon Lilina. Some suggest taking an area of effect special such as Rising Flame to apply splash damage that is unaffected by color and can easily bring enemies down to 1 HP with the large difference between her potential Atk and her enemy's Res. Lilina's Spd problems are best dealt with by running Swordbreaker or R Tomebreaker as it at least allows her to better combat units of her own type. Her Skill C can be a plethora of supportive skills that help her allies. She is a decent candidate for Ploy skills given her good Res so that option is also available.

Blush of Youth
A noble of Ostia and Roy's friend since childhood. Focused on choosing gifts for those dearest to her. Appears in Fire Emblem: The Binding Blade.

Valentine Lilina existed in an unsaturated weapon/unit type combination pool and when compared to her counterparts, she stood out having slightly better offense than Cecilia but not quite the potent force of some later units introduced after her. She can easily fill a role given to her for a Cavalry team, giving her excellent flexibility, but other units have been introduced since and can specialize for specific niches.

Green Gift neutralizes enemy bonuses if they use ranged weapons, making her an excellent check for common bladetome users who rely on buffs. Blazing Flame is an area of effect special that causes damage equal to 1.5x the different between Lilina’s Atk and the foe’s Res. With her modest Atk, she can deal decent splash with it. HP/Atk 2 gives her a flat HP +4 and Atk +2 increase which are good short term increases, but better replaced. Attack Tactic grants a +6 Atk buff to allies on within two spaces of Lilina if there are no more than two allies who are of the same movement type. This is useful for mixed teams, but not for pure Cavalry Teams.

Her defenses are both low, especially her Def. With a plethora of Red physical units to choose from, Valentine Lilina is utterly helpless against any Red unit who can get to her. While her Res is slightly stronger, common red mages like Sanaki, Katarina, Tharja, and ironically her own original form. Certain strong Green Mages can combat her easily, though if she is maintaining her Green Gift, she can depower some of them like Nino. Anti-Cavalry weapons are another new weakness including Gray, his Zanbato, Summer Micaiah, and Rhajat.

Valentine Lilina can be turned into a Gronnblade user as her stats are strong enough to give it decent power behind and with Cavalry boosts, she can unleash devastating attacks. Fury and Desperation are the standard skills taken to boost her stats and give immediate follow-up attacks respectively. Moonbow ignores parts of her foe’s Res and charges quickly while Glimmer is powered by buffs she receives. A Cavalry skill of some form is recommended for her as she is at her strongest on an enemy team. Finally Reposition is always a solid choice for a Cavalry unit.

Beachside Bloom
The only daughter of Hector, the marquess of Ostia. Excited to dive into the ocean wearing her brand-new swimsuit. Appears in Fire Emblem: The Binding Blade.

“Roy...please... Don't fail...”
—Lilina's death quote in The Binding Blade.
“Roy... If this was a real battle, I'd be dead. Remember that defeated allies are gone forever. Be more careful in real fights, okay...?”
—Lilina, in the tutorial

“Father... Watch over us.”
—Lilina's final battle quote in The Binding Blade.

Lilina - Beautiful Duchess (美しき盟主 Utsukushiki Meishu, Beautiful Alliance Leader)
"After returning home, Lilina became the marquess of Ostia and dedicated her time to rebuilding her land. She later rebuilt and led the Lycian League to create the Kingdom of Lycia, a peaceful nation blessed with prosperity and harmony."

Lilina and Roy
"After returning home, Lilina became the marquess of Ostia, and married Roy a short while later. Together, Roy and Lilina united the Lycian League and created the Kingdom of Lycia, a peaceful nation blessed with prosperity and harmony." 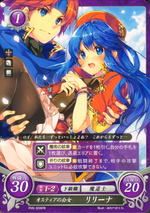 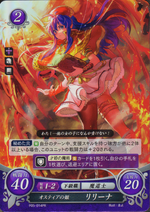 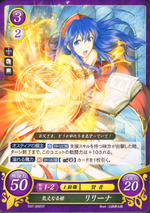 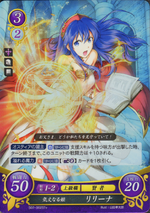 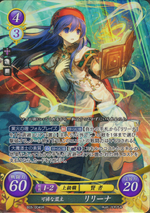 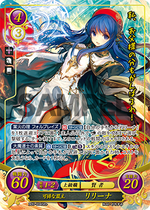 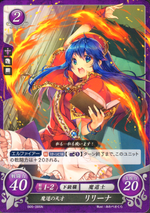 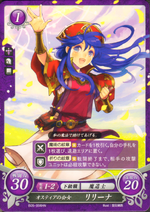 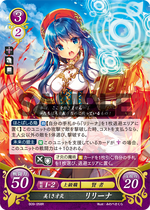 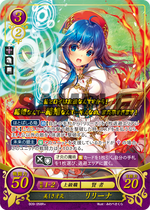 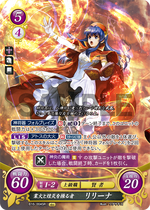 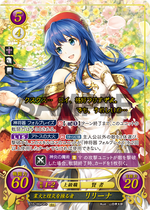 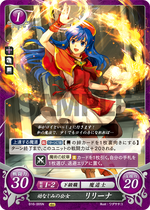 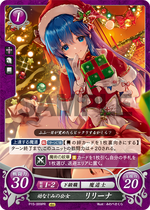 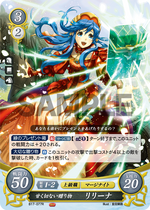 Lilina is a combination of the name "Lily" and the suffix "-ina" which mean "Little", and could be translated as "Little Lily". Her name could be a derivation of all her potential mothers' names, which include Lyn, Florina, and Farina.