Danielle Judovits
[view]
Lilith is a non-playable character from Fire Emblem Fates. She is an Astral Dragon that lives in a Shrine in My Castle.

Lilith is Corrin's attendant, and always follows them when she can. She can help her allies when they fight in My Castle during StreetPass Battles and Castle Invasions. Interestingly, she is capable of using staves and breath weapons, such as her Astral Breath.

Lilith will accept any food made in the Canteen. As she is fed, the food given will affect her stat growths. She will also give Corrin a Gold Bar every three levels she gains.

Lilith first appears in Chapter 1, where she sees Corrin off when they leave the castle; she's in her human form, masquerading as a servant girl in charge of the stables. Later in Chapter 3, after the Ganglari throws Corrin into the chasm, Lilith suddenly appears, transforms into her dragon form and rescues them by transporting them into the Astral Plane. It is here that she reveals that they first met when Corrin was very young; a tiny baby "bird" that Corrin found and nursed back then was Lilith. Grateful for their kindness, Lilith wanted to be by them for the rest of her life.

It is revealed in the Hidden Truths 2 Xenologue that Lilith is, in fact, the younger half-sister of Corrin, as she was self-sired by Anankos as another pawn in his schemes. Despite Lilith's best attempts to please her "father", Anankos never showed her any form of love, but she still remained loyal to him.

When Anankos' human avatar brings three warriors from another realm, Anankos orders Lilith to intercept them and kill them. After confronting the human Anankos, she puts up a tremendous attack against them, but Odin, Laslow, and Selena receive Anankos' blessing, granting them the power to defeat the summoned Vallite forces. After the battle, Lilith continues to summon more troops, but Anankos sends the three warriors to Nohr in hopes of finding their child.

Left alone with Anankos, Lilith attempts to kill him, but oddly cannot bring herself to do so. After the human Anankos calls her his beloved daughter, she wavers and abandons her will to kill him.

Anankos' dragon form senses this and attempts to kill her, but the human Anankos sacrifices himself to protect her. As Lilith holds the dying human form of her father, she regrets letting him die. As Anankos' human avatar expires, he says his final apologies to Lilith, Mikoto, and his child.

After hearing the child's name, Lilith decides to head to Nohr to find this child and protect them in her father's place. However, she vowed never to speak of their true relationship in order to protect her father's draconic form.

In Chapter 24, after Corrin and the Hoshidan successfully enter the Nohrian Castle, they wind up in the training grounds rather than the throne room. Surrounded by Nohrian troops led by Hans, the army is quickly overpowered. As Hans moves in to kill Corrin, Lilith appears, intercepts the blow. Enraged, Corrin attacks the Nohrian soldiers and eventually kills Hans.

After the battle, Corrin desperately tries to keep Lilith alive but neither Sakura nor Elise can save her. Lilith changes into her human form as she says her final farewell to Corrin, saying that with her death, she has repaid Corrin who saved her life. With her death, Corrin weeps in sorrow, but with some words from Ryoma, vows to finish their task to defeat King Garon for Lilith and many others who needlessly died during the war.

Lilith appears in the Endgame during a near-death experience by Corrin alongside Xander, Elise, and Flora. They encourage Corrin to return to the land of the living to finish the fight against Garon.

In Chapter 7, Corrin and Lilith walk through the Woods of the Forlorn, on their way to complete their mission to put down the Ice Tribe's rebellion alone. After Corrin runs into some Faceless, she then warps back into My Castle.

In Chapter 21, Corrin is ambushed by a Faceless when they nearly make it to the top of the Eternal Stairway. Lilith leaps in the way and receives a mortal wound. As Lilith lays dying, the great Astral Dragon, Moro, transforms Lilith back into her human form as she tells Corrin that she was happy to protect them as they had done to her years ago.

Lilith dies in Corrin's arms, leaving them to wonder what is their purpose when they could not protect Lilith. However, with Xander's encouragement, they move on as that is what Lilith would have wanted. Corrin tells Lilith that they will meet again one day on the other side and talk of old times.

Lilith appears in the Endgame during a near-death experience by Corrin alongside Mikoto, Ryoma, and Takumi. Lilith's spirit appears and guides Corrin back to life, and the Shadow Yato is restored.

In this route, Lilith brings Corrin and their servant to their new My Castle after they decide not to side with either of the Hoshido and Nohrian armies. She is not seen again during the rest of this route and does not die like in the other two routes.

Lilith makes two appearances in the final chapter of Heirs of Fate. In her first one, she offers to enhance the children's crystals in order to teleport all of them. Later, after Anankos' defeat, she appears to act as his guide to the afterlife.
"End of spoilers. It's a pleasure doing business with you!"

Lilith is humble, caring and considerate. She keeps her true heritage and ties to Corrin a secret. Due the fact that she is a dragon, she has the ability to communicate with animals and has access to other planes of realities, such as the astral realm.

Afrer Corrin nursed her back to health when she was heavily wounded, she shapeshifted into human to assist Corrin through the years, in order to repay their kindness. She became extremely close to Corrin as one of their maids. During the story of Fates, Lilith has always been willing to leap into danger in order to protect them, even sacrificing her life in exchange for their safety.

On the Birthright and Conquest routes, Lilith will die after Chapters 24 and 21 respectively. In this case, she will appear as a spirit during My Castle battles, helping out castle defenders. She can still be fed food and gain stat growths.

Lilith's growths depend on what kind of food she is given. Each certain type of food eaten boosts one (or two, in the case of strength-based food) particular stat(s) by one point while increasing the others by 0.5. The different kinds of food and what stats they boost is shown in the table below.

Lilith is capped at level 99. However, she can continue to gain levels and stats indefinitely past this point. As every third time feeding her yields a Gold Bar, it is best to feed her whenever possible—even if her stats are mostly capped in any circumstance. The only exception to this is if the food is limited and is being reserved for other uses, such as cooking or making accessories.

Astral Daughter
Corrin's attendant, whose true form is that of an astral dragon. She reveals her true self to rescue Corrin from a crisis. Appears in Fire Emblem Fates.

Lilith is a special Blue Dragon Flying unit, a combination only shared with Naga, which further makes Lilith special as she is readily available all year as a possible pity break and not a Legendary/Mythic banner unit. Thanks in part to her combination, Lilith is a valuable dragon, beast, and flier teammate all in one package. As a flier, she gains a massive mobility range and her overall offensive stats are solid with a 36 neutral Atk and 41 Spd, perfect for hitting decently hard and can score double attacks on a decent portion of the cast while avoiding some of the fastest units in the game. Her bulk are not her highest strengths, but it is still workable for modest dueling performances. Lilith performs admirably well but her main strengths come from having a support unit as explained below.
Astral Breath grants Lilith a flat +3 Spd increase, bringing her neutral to 44 and has the adaptive damage effect from battling ranged units. Lilith should ideally be paired with some unit as Astral breath's first effect allows her to immediately move to an adjacent tile of her Ally Support. Its second effect gives her a massive +5 in-combat boost to her four core stats during combat if she is within three spaces of her Ally Support which not only stacks on the existing Ally Support Buff and possible Summoner Support bonuses, but also other visible and in-combat buffs. Even an unmerged Lilith can reach deceptively high stats in combat under the player's control. Male Corrin fittingly is perhaps her best partner as his Yato's strength further boosts her Ally Support and makes her just that much more dangerous.
Reposition is a perfect support skill to bring her allies out of range of the enemy or move them behind her so she can take a hit. In tandem with Astral breath, she can also quickly save her partner. Attack Speed Bond grants her a further Atk/Spd +5 in-combat boost when she adjacent to an ally, again, ideally her Ally Support. Defense Resistance Link grants herself and the ally she uses a movement assist skill such as her default Reposition, a Def/Res +6 visible buff, perfect for granting her enough bulk to sustain a lot more hits with ease. Finally Joint Drive Attack grants an additional +4 Atk during combat to her allies within two spaces and receives the same benefits herself if she is within two spaces of an ally.

Due to the nature of feature access for enemies, Lilith cannot obtain the full benefits of her weapon as an AI unit, thus a huge majority of her weapon's strengths vanish. Hence, Lilith is mainly a "threat" under the player's control. If she is used as an enemy, dealing with her comes down to the passive three skills she runs. Greens make nice counters to her as they have the color advantage. Dragon effective weapons especially those run by Julia and Deirdre as they have color advantage plus effectiveness, though Julia's blue tome form works just as well as does Legendary Tiki. Naga is similarly dangerous as she can turn her allies into dragon slayers as well. Unless running Iote's Shield, she is also vulnerable to bows as well.

Because of Lilith's stat potential, Glimmer can take the full power of these buffs and benefits and turn them into raw power that few units can survive. Desperation takes full advantage of her high Spd and once under its threshold, at maximum power, most units aside from the bulkiest green units will likely not survive combat against her.

Silent Broodling
Daughter of Anankos. Wholly dedicated to serving her father and removing any obstacles from his path. Appears in Fire Emblem Fates.

A devotee of the Astral Dragons. Watches over the castle.

Lilith is illustrated in the trading card game with the following cards: 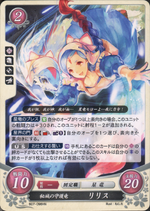 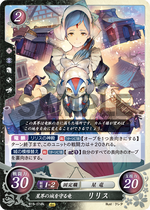 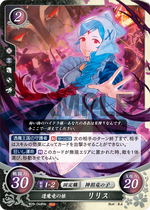 Lilith comes from the Hebrew term, Lilith or Lilit, which means night creature or night monster. It was also the name of Adam's first wife, in Jewish mythology, who was born from the Earth as he was, unlike Eve who was created from his ribs. In Jewish Mythology, Lilith wanted to be treated as an equal to Adam, and left him after she refused to become subservient to him, and would then never return to the Garden of Eden after she had coupled with the archangel Samael.