[view]
“If you wish to point fingers, point them at the ruler who failed his people. It's his fault we're in this mess.”
—Alm on Lima IV, to Celica

Lima IV (リマ四世, Rima Yonsei) is a background character from Fire Emblem Gaiden and its remake, Fire Emblem Echoes: Shadows of Valentia. The cruel and hedonistic king of Zofia, his little interest in politics led to him become infamous for his rule.

Lima was the former king of Zofia, crowned after the passing of Lima III in 384 of the Valentian Calendar, being his eldest son. Unfortunately, by becoming king at a rather young age and lacking proper custodians to guide him, Lima arrogantly flexed his power and began a reign of tyranny while indulging himself in pleasure and the bounty of wealth, food and entertainment that the Earth Mother provided for the Zofian people, leading to tremendous animosity towards him on all fronts. At one point, an assassination plot against Lima was seemingly exposed and prevented by Desaix, who received Lima's recognition and started to participate in governmental affairs, to the populace's displeasure.

Becoming particularly polyamorous, Lima had a great entourage of wives throughout his reign as well as many children. One of his wives was a Rigelian noblewoman who married him in order to secure food for her nation during the aforementioned famine, a pact Lima would dishonor and not uphold. With this noblewoman, Lima sired a son named Conrad. Another one of his wives was Liprica, a priestess of Mila whom he desired during a visit to the Temple of Mila. Having Liprica away in the middle of the night, she was made into one of his wives.

Mycen, a renowned general of the Zofian army, made multiple attempts to reason with Lima, but he was stopped by Desaix at every turn. Eventually Lima became little more than Desaix’s string puppet, as merely a whisper of possible betrayal against him would lead to immediate imprisonment or even execution, leading diplomatic relationships with the northern country of Rigel slowly fall apart and culminating in Mycen being stripped of his military position and exiled from Zofia Castle to the protest of Zofian officers, leading people to further question his leadership.

Some time later he and Liprica sired a daughter named Anthiese, but Liprica soon died afterwards after falling ill. With her death, Lima's philandering habits only grew worse, as despite his relationships with many women, she was the love of his life, and after losing her, his heart was full of unease and boredom. Thus, his mind was dulled by everlasting days of pleasure, as he used his decadence as a means of escape, though it led the corruption within the kingdom to deepen. Furthermore, it seems he was uninterested in their daughter, as when Princess Anthiese’s residential villa was set ablaze (which was secretly instigated by Desaix), Lima barely reacted when he was told that everyone inside perished, since he was still young himself, and was apathetic towards his children and matters of succession, not to mention he had a few sons born from his many consorts after Liprica’s death.

This reckless ruling came to a head when after many years into his reign Rigel was experiencing a harsh famine and Lima refused to help his northern neighbors by responding with mockery. That, along with infighting in the kingdom, caused both Rigelians and Zofians alike to hate the selfish king, leading into war in and out of the country.

Finally, in 400, a coup was soon instigated by Desaix in which the remaining members of the royal family were executed along with Lima himself, ending the Dynasty, though his death had been kept hidden. But the knights of Zofia that became the Deliverance eventually discovered the truth, and spread the news among the people. However, the populace in general didn't truly mourn his death due to his previous actions. In fact, most of the Zofian nobility supported the chancellor's deeds and swore allegiance to him because of it. 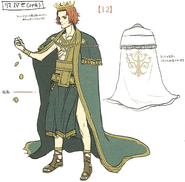