Sage
[view]
“I shall take your life and your essence, all for the sake of my master.”
—Limstella

Limstella is an enemy character in Fire Emblem: The Blazing Blade. They are the most powerful of the morphs created by Nergal, and ostensibly the most powerful magic-wielding foe in the game other than Nergal himself. Limstella bears an impassive nature and is totally loyal to their master.

Limstella's primary objective is to collect the quintessence of the strongest individuals for use by Nergal, and thus, they are shown to harvest the essences of many of the subsequent boss characters, apparently also having taken the quintessence of Marquess Darin of Laus at some point. Completely devoted to their master, Limstella will sacrifice everything for Nergal, even their own life.

Nergal claims that Limstella has acquired "perfect power and perfect beauty" before sending them forth to dispatch the protagonists and claim their essences.

Though one might guess that Limstella is entirely without emotion, there are a few instances that give some reason to believe otherwise: the most forward of which is their twisted appreciation of powerful quintessence and the quote given upon dying, where they say: “I am not human. This mind and body are constructs. Yes, as is this sorrow." With their cryptic death quote, Limstella reveals a clear knowledge of their condition and implies that they did possess some form of emotion.

Overall, Limstella seems indifferent to almost everything, even their own death, at which point they remark that they feel 'sorrow', but acknowledges that this emotion is only a construct. Also, before being sent into battle by Nergal, who at that point in time says that Limstella will die before tomorrow anyway due to the overwhelming power of the magic they wield, Limstella simply stands with no emotion and accepts their fate. Doing little to harm the protagonists, or even neutral units (except for a few fallen Black Fang members) until near the end of the game, they seem to lack the same sadistic nature found in the other morphs, like Sonia or Ephidel, and only seeks to harm those whom they are directly ordered to attack. Strangely, despite being the most powerful morph, Limstella also seems to be the most docile.

Note: Limstella may not be acquired as a player character without the use of a cheat device, though their Sage class possesses slightly different stat caps than the normal female Sage.

Unless one factors Hector Mode, which uses the normal female Sage class causing Limstella to have lower Con in these modes.

“I will take your life and your essence. All for the sake of my master.”
—Limstella's battle quote
“I am not human. This body and this heart are constructs. Yes, as is this sorrow.”
—Limstella's death quote

Limstella is illustrated in the trading card game Fire Emblem Cipher with the following cards: 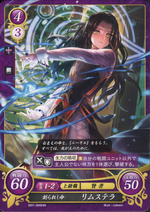 The name "Limstella" seems related to light, with "stella" being Italian for "star".

Limstella as a Sage in Fire Emblem 0 (Cipher)