Thunder Mage
[view]
“The villagers all think they're an army of liberators, but why did they have to kill Ishtore? Oh, I don't know what to do. Mother... I wish you were here...”
—Linda

Linda is a playable character from Fire Emblem: Genealogy of the Holy War. She is the substitute character of Tine if Tailtiu was not paired up.

Linda is the daughter of Tailtiu's younger sister, Ethnia and the sister of Amid. She is also the cousin of Arthur, Tine, Ishtore, and Ishtar, and one of the granddaughters of Reptor. Like her family members, she bears the blood of Crusader Thrud.

In a similar manner to Tailtiu and Tine, Ethnia and Linda were hiding in Silesse until they were captured by Bloom, who imprisoned them in his home. She witnessed Hilda's brutal abuse towards Ethnia that eventually led to the latter's death.

After Ishtore's death at the hands of Seliph's army, Linda is sent out onto the battlefield by her uncle, Bloom. She is accompanied by Vampa, Fetra, and Eliu, who attempt to outdo her. During the battle, she meets Amid, who reveals himself to be her brother. At this time, she defects to Seliph's army and remains in it for the rest of the war.

During Chapter 8, Linda can meet with Jake, who notes that her name sounds familiar. Before parting ways, she receives an amulet from him that boosts her magical resistance. In her conversation with Amid in the final chapter that can occur if neither of them have fallen in love, Linda asks Amid about Ethnia's reason for leaving Freege and discovers that it was because Tailtiu died fighting alongside Sigurd.

Linda has a similar personality to Tine; humble, kindhearted, and sweet. She also bears a grudge towards Hilda and Bloom for being the direct causes of Ethnia's untimely fate.

Unlike Tine, Linda's starting class is that of a Thunder Mage, which will allow her to use the Thoron spellbook. She is one of two replacement characters possessing Holy Blood.

Linda is somewhat preferable over Tine, as she possesses the Paragon skill. Tine will always end up surpassing Linda in most stats when they are at the same level, but because of Paragon, Linda will promote sooner, which comes with a lovely set of stat boosts. Further, thanks to being able to use Thoron from the jump, she will essentially have 6 more points of magic than Tine with Elthunder (the strongest tome she can have till promotion). On the other hand, opting for Linda means you'll also have Amid, who is almost always worse than the character he's replacing (Arthur), so the question does give one pause. Both options aren't bad; they both have their ups and downs.

In Chapter 7, Amid may speak to Linda, and she will defect to Seliph's army.

In Chapter 7, Linda may speak to Seliph, but nothing will result of it.

In Chapter 8, if neither Seliph nor Linda has a lover, he may speak to her after Conote is captured. She will gain three points of HP and 100 love points with him.

In Chapter 8, if Linda visits a certain spot in the mountains, she will meet Jake and gain three points of Magic Defense.

In the Final Chapter, if neither Amid nor Linda has a lover, he may speak to her, and she will gain one point of Luck.

In the Final Chapter, Linda may speak to her lover if he is either Seliph, Ced, Hawk or Leif. This will result in her lover gaining three points of Magic.

Linda is illustrated in the trading card game Fire Emblem Cipher with the following cards: 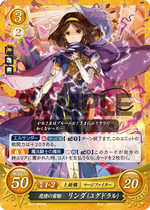 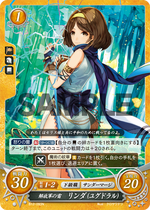 Linda's name means "beautiful" in portuguese and spanish. Also derived from the german word lind that means "tender" and "mild".