Not to be confused with the Genealogy of the Holy War character, Linda.

Chapter 9: The Pyrathi Dragon (Shadow Dragon and the Blade of Light)

Chapter 11: Knorda Market (Shadow Dragon and the Blade of Light)

Julie Ann Taylor
[view]
“No! Let me fight. With Princess Nyna’s blessing, and the tome my father left me, I can wield Aura magic. Let me use it to avenge him. I want to destroy Gharnef myself!”
—Linde, during her recruitment scene in Fire Emblem: Shadow Dragon

Linde is the daughter of Miloah, one of Gotoh's best students along with Gharnef, thus enabling her to use the powerful Aura spell. She is targeted by Gharnef's men, so she disguises herself as a boy, but in turn, she is captured and brought to a slave market. Marth frees Linde, and she decides to join him to fight and avenge her murdered father. She later moves to Pales and becomes Nyna's apprentice and most trusted individual.

When Hardin falls into madness, Nyna entrusts the Fire Emblem to Linde, who joins up with Marth's army. She later returns to Pales, and seems to have found an idol. Her ending hints that she tries to make herself more beautiful, possibly for the said idol.

While a very high-ranking noblewoman, Linde is not the type to simply watch life pass around her, as though unused to how real life works due to being sheltered, she endures many hardships that would break most people by adapting to the situation.

The loss of her father deeply affects her in both good and bad ways, since she strongly desires revenge, but made her relate with those who lost family more easily.

It is hinted that Linde might have a crush on Merric. It's mentioned in her Mystery of the Emblem ending that she becomes stronger and more beautiful for an unnamed man from a "magic academy", and they do have supports in New Mystery of the Emblem, but she keeps her feelings in secret after seeing that he likes Elice. It's alluded to again in her talks with Marth in Fire Emblem Warriors, where they speak about Merric's relationships with both of them and it's said that Marth specifically asked Merric to help and protect Linde.

In Book 2 of Mystery of the Emblem and its remake, Linde joins very early unlike last time in Chapter 11 of the last game (Chapter 9 of Book 1). She joins early at the beginning of Chapter 3 of Book 2, giving her a better opportunity to get trained. Linde still has low defense, but her high speed and luck compensates that fatal flaw, however, Mystery of The Emblem only has stat caps of 20 unlike its remake. It is wise to use Starsphere shards to boost her growth rates in defense or have her attack from behind your other units. Even at base, Linde immediately contributes by being able to deal the most damage to the chapter 3 Dracoknights due to her targeting resistance instead of defense. With a couple level ups, her offense will even match the likes of Palla and Sirius. In Anri's way, Linde with the Shaver or Nosferatu tome is the most efficient way to deal with wyverns and dragons since your other mounted units have to dismount in order to use effective weaponry. And once she promotes, she will be able to use almost every nonexclusive staff in the game thanks to her high weapon level growth. Overall, she is one of the most powerful units in book 2 along with Palla, Sirius, and Ogma.

Linde is one of the first Blue Mages of Heroes, creating one of the most potent unit types in the games current lifespan; the offensive blue mage. Defined by strong offensive stats in exchange for low bulk, they are meant to simply unleash high damage and destroy enemies before they can either attack or counterattack. While many blue mages introduced later copied or enhanced her strengths, Linde has maintained a solid place as a reliable blue mage who not only can deal high damage, but can also support allies through her Weapon.

Aura is Linde’s personal tome and all versions on it involve forms of ally support. Its standard effect is rather lackluster as it has an innate Breath of Life 2 effect, healing adjacent allies 5 HP when she initiates attacks. This was changed with Weapon Refinery, where she gained the ability to apply a new effect to Aura or evolve it into Dark Aura. Both weapons and their Refines have similar effects of +6 Atk to adjacent allies at the start of each turn. Aura affects Tome and Staff units while Dark Aura affects all direct attacking units. When both are refined, she gains +5 Atk/Spd during combat so long as she is within two spaces of said unit types. Linde can find herself flexibly applied to different teams as a result and values working closely with the units she is going to be buffing.

Her remaining kit has short term skills that ultimately impacts her performance in minimal ways. Ardent Sacrifice gives 10 HP from Linde to an ally which is good to put her in the damage range for certain skill listed below, but not entirely necessary. Speed +3 gives her a flat +3 Spd while Fortify Resistance boosts adjacent ally Res by 4 at the start of each turn.

Despite her high damage output, Linde is susceptible to high Res Green units like Gunnthrá, Deirdre, and Yune who can soak damage and retaliate. Specifically designed anti-mage units like Felicia, Fjorm, and Halloween Sakura counter her heavily. Distant Counter Green units like Hector can also be problematic as they can ward off a single attack and smash through her low Def. Otherwise standard green offensive physical units can run through her low Defense and she is vulnerable to common Ploy units.

Linde’s flexibility with her Aura tome (or Dark Aura) means that she already has a strong Hone Attack-like effect so Hone Speed is a natural fit to benefit her allies offense potential the most or a Speed Wave skill to give herself the speed buff during the turns they are active. Joint Hone Speed also does a similar, but slightly less boost with the tradeoff being that the skill activates each turn.

Since she is naturally buffed, Glimmer makes the most of these buffs. Draw Back makes her pull allies out of danger or can use Reposition to a similar effect. Fury’s flat stat boost is beneficial overall with the downside of forced recoil benefitting her, mainly to get into Desperation range.

Summer Rays
Daughter of Pontifex Miloah from Archanea. She's a bit flustered, since she's not wearing her usual robe. Appears in Fire Emblem: Mystery of the Emblem.

Summer Linde was a unique unit upon release as the first dagger cavalry unit in the game and is currently the only colorless cavalry dagger unit. She maintains a similar combat role as her standard form, having great Atk and Spd stats, but low bulk in exchange. Her main advantage in her new role is the fact that she can benefit from Cavalry Buffs and can debuff enemies with ease thanks to her new weapon class.

Starfish has an innate Desperation effect, giving her not only a strong offensive built in effect, but also freeing her Skill B for other skills. It also inflicts Def/Res -7 to her target and foes within two spaces of said target after battle, prepping her allies to finish off the remaining enemies.

Ardent Sacrifice allows her to heal allies by giving them 10 of her HP. Brazen Atk/Res increases her Atk/Res by 7 during combat when she is under 80% health, which syncs with her Starfish skill. Cancel Affinity removes negative affinities and reverse weapon triangle to punish Triangle Adept users.

Summer Linde does not like getting initiated on as any form of offense from enemies can run through her low Bulk, especially exceptionally fast units or units with large Atk stats who can nuke her. Common units like Ayra, Nephenee, Katarina, Ishtar, Reinhardt, and Nino can do this. Armors can take most of Linde’s offense in stride and return fire if they carry Distant Counter. Finally, while she does have Cancel Affinity in her skill set, she is vulnerable to Raventome users such as both Mage Robins, Sophia, and Lyon if she removes the skill.

Summer Linde has a ton of daggers to choose from mainly from her fellow Seasonal units to gain useful battle effects such as unit type effective damage or skills that trigger off of Special Skill activation. She has plenty of options to choose from, but if running such skills, she will want to get Desperation since that is no longer attached to her weapon.

If sticking with Starfish, Linde’s freed Skill B is great to have Chill Defense to help her combat more enemies or help allies who are better offensively finish off particularly physically bulky enemies. She can be a leading unit so Attack Speed Solo gives the largest boost to her Atk and Spd when she charges off first or Fury makes an excellent alternative, giving her a rounded offense and bulk increase while taking the recoil as a means to enter Desperation range quickly. Skill C is flexible, but given her synergy with cavalry teams, Hone Cavalry, Fortify Cavalry, Goad Cavalry, and Ward Cavalry are her best four options for those teams.

Linde appears in Chapter 6 during the first trial to acquire the Opera of Light: Fire Emblem as one of four boss Mirages. She fights alongside Macellan, Dolph, and Gordin.

Linde is illustrated in the trading card game Fire Emblem 0 Cipher with the following cards: 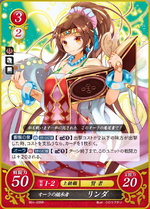 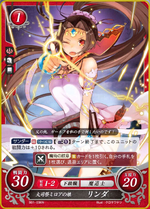 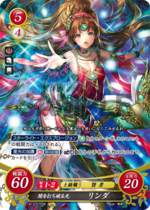 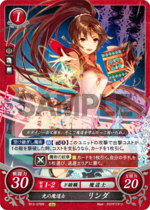