Sister
[view]
“No, I would never have survived without him. After my father was killed, our mansion was taken away, and for two years I was unable to even go outdoors freely. The cruel surrogate would constantly threaten me to tell him where the prince was. The thought of that abuse still sends shivers down my spine... But then...Deen rescued me from that nightmare. He protected me from assassins from the Empire, and always cheered me up when I was about to break down. He always laughed it off, but I was sure he was a well-known mercenary. I never knew he was working under Lord Arion...”
—Linoan referring to Deen in a conversation with Eda

Linoan is a playable character from Fire Emblem: Thracia 776. 15 years of age, she is the duchess of Tahra and the fiancée of Prince Arion of Thracia. Linoan is also a descendant of Heim.

When the Grannvale Empire invaded Tahra in search of Leif, Linoan's father was executed and she was evicted from her family's mansion. She was then imprisoned by a surrogate, who constantly threatened her while interrogating her on Leif's whereabouts.

The cruel treatment Linoan endured went on for at least two years until she was eventually rescued by Deen on Arion's orders. He then served as a bodyguard, dutifully protecting her from the Empire's assassins. Throughout this time, Linoan did not know Deen was working for Arion, mistaking him for a well-known mercenary.

Some time before the events of Thracia 776, the Tahran citizens started a revolt against the Empire in response to the Child Hunts. Linoan was elected as the leader of their revolt. However, King Bloom of Munster did not tolerate this rebellion, ordering the Friege army to lay siege to Tahra. After all the mercenaries in her employ fled, Linoan sent her trusted servant, Safy, to recruit aid to her cause from beyond Tahra's borders.

Linoan first appears at the end of Chapter 13, when Leif's army eventually arrives in Tahra in answer to her call for help. Preparations are promptly made for the defense of Tahra, and a fierce battle breaks out in Chapter 14.

However, midway through the battle, the Thracian army and the Schwarze Rosen arrive on the scene to capture Tahra. Arion rushes to speak to Linoan, urging her to hand Tahra over to Thracia to minimize the loss of civilian lives and also let him take her under his protection. While Linoan agrees to hand the reins of Tahra over to Arion under the condition that she is given its rule upon her return, she declines to be taken under his protection. She chooses instead to flee with Leif's army, proceeding to do so along with several civilians in tow in Chapter 14x.

When Leif's army proceeds towards Ford Danzhi after rendezvousing with Seliph in Chapter 21, Linoan can visit a church in the area. Here, she will meet with an elderly priest who introduces himself that he is an old friend of her parents. He then reveals the truth of Linoan's heritage as a descendant of Heim to her, offering to awaken the latent power that lies within her. Linoan will accept this offer, and she will be promoted into a Sage.

Linoan then goes on to continue supporting Leif in his cause to liberate Northern Thracia from the Grannvale Empire. When Munster is finally recaptured by Leif in the Final Chapter, Linoan learns from Deen that he can no longer accompany her, as he intends to return to Thracia. In a state of frenzied panic, she tries to stop him, and although Deen chastises her for being childish, he chooses to remain at her side for the time being.

Linoan eventually returns to the war-torn Tahra, dedicating her life towards its reconstruction. Despite her engagement to Arion, she never marries in her lifetime, as she is unable to ignore her feelings for Deen.

Tempered by the hardships she is forced to endure in her life, Linoan is portrayed as a strong and resilient character, maintaining an air of dignity about her as she bravely confronts the threats that she faces. These are traits that translate well into her role as duchess of Tahra, as she comes to lead the city in a revolt against the oppressive Empire, even despite knowing the odds are stacked against them.

Beneath her façade of toughness is an emotional, sentimental person, particularly with matters relating to the heart. Although betrothed to Arion, she does not return his feelings, as she instead falls in love with her bodyguard Deen. While she never explicitly expresses her love for Deen, the heartfelt way by which she reminisces about him to his sister Eda makes her feelings for him very clear.

This love is made especially evident at the end of the Final Chapter, where she breaks out of character in frantically begging him to stay at her side when she learns of his plan to depart for Thracia.

Although Linoan is slightly hampered by being locked to a late promotion in Chapter 21, she is easily one of the most useful units in Thracia 776. Being a magic unit with a C rank in staves instantly makes her beyond useful, as she has immediate access to the Magic Up, Physic, and Restore staves, in turn making her very useful the moment she joins. Although Linoan's bases are shaky, her starting chapter is a great opportunity to train her Staff rank and get her some experience. Being a Fog of War map, she can use Torch and also use Magic Up to help other units survive the magic-based enemies on the map.

Linoan can also wield the Resire tome at base, and will most likely be your only unit who can use it when she joins. With it equipped, it is very difficult for her to die in her starting chapter as the enemy ranks comprise magic units and weak Pegasus Knights, both of whom she can survive easily with Resire equipped. This, combined with the usefulness of her Staff utility, makes her starting chapter a fantastic way to give her experience.

It is advised to give Linoan the Od Scroll to boost her Skill growth and raise it to 10 to ensure she does not miss with staves. You will also want to get Linoan's Staff rank to B before Chapter 21; once she promotes, it will be bumped up to A, and Linoan will then be able to wield more potent Staves like Warp and Rewarp.

"Linoan returned to Tahra and set about rebuilding the war-torn city. She guided Tahra into an unprecedented era of prosperity, secretly using her wealth to support Leif's reign. Despite being praised for her beauty throughout her life, she never married. Her marital status—or lack thereof—became the subject of constant gossip."

Linoan is illustrated in the trading card game with the following cards: 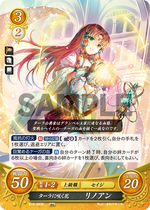 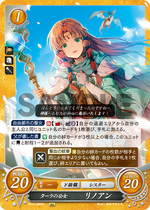 Linoan as she appears in the Trading Card Game.

Linoan as a Sage in Fire Emblem 0 (Cipher).

Linoan as a Priestess in Fire Emblem 0 (Cipher).