Joe Brogie
[view]
“I am Linus Reed, son of Brendan Reed. I am the vengeance of Lloyd, whose life you stole! Prepare yourself! I'm coming for you!!!”
—Linus, shortly before attacking Eliwood in The Blazing Blade

Linus, full name Linus Reed, is a non-playable character in Fire Emblem: The Blazing Blade. He is the younger son of Brendan Reed and the brother of Lloyd. Linus' title is the Mad Dog, and is one the Four Fangs.

He does not trust Sonia and her influence in the Black Fang, though he is very fond of her "daughter", his step-sister Nino. The official players' guide for The Blazing Blade says that Linus is the more level-headed between him and Lloyd, when he is actually the brasher one.

Not much is known of his childhood, though what is known is that, when his father, Brendan Reed, formed and became head of the Black Fang, an assassin guild situated in Bern, he and his brother, the White Wolf Lloyd, quickly flew through the ranks and became one of the legendary Four Fangs. Despite being skilled, he is also rash and impulsive, tending to misjudge his opponents before charging into battle. Because of this, he and Lloyd were nearly inseparable as the latter usually watched over the former. He and Lloyd were quickly joined by the Valkyrie, Ursula, who is cold and ruthless, and the Assassin, Jerme, who was obsessed with his craft. Later, when Nergal and Sonia began to take a hold of the Black Fang, Jerme was replaced with Jaffar. Shortly after Nergal is gravely wounded by Lord Elbert of Pherae, he orders Sonia to bring together the Four Fangs to hunt down the Lycian lords, Eliwood, Hector, and Lyndis. She complies, but, after she gives her orders, Linus, Lloyd, and Ursula remain suspicious of the Sage. Nevertheless, they carry out their orders.

If the total level of the lords is above 50, then Linus will confront them in a town in Bern. Accusing them of their crimes, he summons a contingent of Black Fang assassins and engages the lords inside the town. After a brief but intense skirmish, Linus is defeated by the lords, but finally hears them out and learns that they are good-natured and not what Sonia had depicted them as. Before he could relay this information to Lloyd, though, he is confronted by the morph Limstella and killed.

If the total level of the lords is below 50, then Lloyd will have confronted the lords in a foggy valley and be killed by Limstella after being spared by the lords. Linus, after encountering the body of his slain brother, goes into a bloodthirsty rage and swears vengeance on the lords and their companions. He is later seen guarding the Bern shrine, attempting to kill any of the lords or their companions, including his beloved step-sister Nino and former acquaintance Legault. He is killed after the struggle.

Regardless of whether he is killed in the town or in the shrine, he is resurrected as a morph by Nergal along with his father, his brother, Uhai, Kenneth, Jerme, Darin, and Ursula.

Linus is best described as rash, impulsive, and extremely loyal to his siblings and loved ones. He shows deep respect to his brother, Lloyd, abiding his orders, though he is wrought with grief after Lloyd's death and loses the ability to reason, evident as he attempts to kill his step-sister, Nino, despite having a close relationship with her. However, with his brother's reasoning, he is shown to be a caring and compassionate individual, changing his beliefs of the lords if he is defeated early in the game and offering to make amends with his brother and to tell him of the lords' sincerity. This would have converted both him and Lloyd to the lords' side had Limstella not killed him. Before the conflict with the lords, he and his brother got along well with several of the Black Fang members, including all of the Four Fangs and several other high-ranking members, such as Uhai. He also doted on his younger step-sister, Nino.

Help Description (Morph): A morph made in the form of the Rabid Hound, Linus.

If the level of the lords combined is above 50, then Linus will be the boss of Four-Fanged Offense.

If the level of the lords combined is under 50, then Linus will be the boss of Cog of Destiny. It is recommended not to confront the Hero with Nino, as he, unlike his brother, will show no hesitation and slay his step-sister.

Linus also appears in Light with an A support with his resurrected brother. He should not be taken lightly as, due to his Brave Sword, he is able to double any party member and, if the party member has low speed, such as a General, then Linus has the potential to strike up to four times. However, he is considered the weakest of the Reed family and should be taken down first.

Mad Dog
A member of the Black Fang known as Mad Dog, and an equal match for his brother Lloyd. He brings judgement down on those he deems evil. Appears in Fire Emblem: Blazing Sword.

Linus is illustrated in the trading card game Fire Emblem Cipher with the following cards: 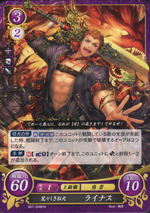