Shove, Roar
[view]
The Lion ( Raion) is both a race and a class of Beast tribe laguz that is exclusive to the Tellius Series of Fire Emblem. A group of Laguz that is able to assume the form of a lion at will, Lions lacerate their foes either with their Claws in Path of Radiance or their Fangs in Radiant Dawn. Like all other Beast tribe Laguz, the Lion class is vulnerable to Fire Magic.

Residing in the nation of Gallia, Lions are regarded as the strongest members of the country. As national traditions mandate that only those possessing supreme strength are deemed fit to rule, Lions are therefore recognised as the leaders of the country by both Cats and Tigers alike. A small segment of the Lions make up the royal family that presides over the laws of the country, with the only known members including King Caineghis and his nephew Skrimir.

The Lions may follow a color hierarchy of strength that is similar to the Dragon tribe Laguz. Giffca, for one, is a black Lion and considered a powerful general, but is lower-ranked on the social scale as compared to the red Lions.

Lions tend to have a statline akin to Wyvern Lords and Warriors, more-so the Wyvern Lords. They possess high Strength, high Defense, with similar Skill and Speed, topping it with poor Resistance.

Battle model of Giffca as an untransformed Lion in Path of Radiance.

Battle model of Giffca as a transformed Lion in Path of Radiance. 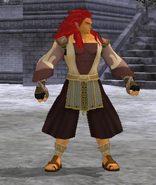 Battle model of Skrimir as an untransformed Lion in Radiant Dawn.

Battle model of Skrimir as a transformed Lion in Radiant Dawn.

Battle model of Giffca as an untransformed Lion in Radiant Dawn.