“We were married fifteen years ago. But a few months after we were wed, Viceroy Ahab rebelled, and I left to fight against him. Lan stayed with her parents here in Blood because she was with child, but... But when I returned, I found the house burned to the ground, my in-laws murdered, and my wife taken from me. The entire city had been overwhelmed by marauding bandits. I did everything in my power to find her. For the past fifteen years, there wasn't a moment I wasn't thinking of her...”
—Lionheart, in a conversation with Plum

Lionheart (レオンハート Reonhāto) is a playable character from TearRing Saga: Utna Heroes Saga. He is the lord of Selba who is known as the Wolf of the Plains. He is also the husband of Lan, the father of Plum, and the younger brother of Queen Maria and Roberto. His real name is Raziel (ライゼル Raizeru).

At the age of fifteen, Lionheart fought alongside the Twelve Heroes in the Leda Liberation War. Later, he began to assist the citizens of Blood in their rebellion against Ahab. Around the same time, he also became involved in a conflict with the Zoa Empire, which took advantage of his absence from Selba to invade it.

Lionheart first met Lan when he saved her from her harsh life as an enslaved dancer. The two of them eventually fell in love and married. While Lan was pregnant with Plum, she was kidnapped by bandits during their attack on Blood, which resulted in her permanent separation from Lionheart.

Lionheart is introduced when he is asking the head priest of the Church of Blood about Renee's whereabouts. He expresses regret for his inability to search for Renee due to his ongoing conflicts with Ahab and the Zoa Empire. Some time later, he meets his niece, Frau, and allows her to stay by his side at her insistence. He is also entrusted with Sun's care by her mother, Silva. Eventually, he enlists the aid of both Holmes and Runan in resolving his conflicts. During the later stages of the liberation of Salia, Lionheart joins Holmes's army.

Later in the game, Lionheart watches Plum dance at Holmes's request and recognizes her dancing style. Afterwards, he approaches Plum to question her about it. At this time, the two of them discover their blood relation. Before the third route split, he reunites with Renee, whom he treated coldly in the past. Despite being unable to forget about Lan, he states that his romantic feelings for Renee are beyond doubt and confesses to her.

In the ending, Lionheart returns to Salia alongside Renee and his most trusted subordinate, Shirou. He can also be accompanied by Plum if Holmes rescued her from slavery in Map 14.

Automatically from the start of Map 22.

Lionheart is competent and capable of filling a slot in a team. If the player needs an archer, he can oblige, and if a front-liner is wanted, he can perform passably. He starts with slightly low stats for his starting level, but he should not be too far out of commission. Growth-wise, he does not have outstanding growth rates, but they are functional. However, Lionheart does have a solid selection of skills that will help him fight effectively in the end-game. Ultimately, he is a unit whom the player can skip out on, but he is a fine pick for a team.

The name Lionheart takes its reference from Richard the Lionheart, a king during the Crusades who is well-known for his military and fighting prowess. 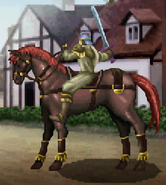 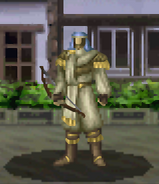