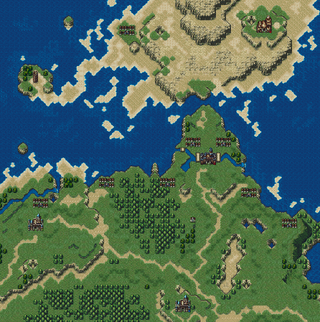 Chapter script
[view]
“King Chagall has fled Agusti's fall and moved his royal court to Madino Castle in the north. honoring his promise to Eldigan, Sigurd allows Chagall his freedom and does not interfere. Sigurd adopts Agusti as his headquarters, and while his troops there recuperate, he persists in negotiating Agustria's return to governance by its own king. Despite his determination to restore Chagall's rule, his orders from Belhalla never change: to remain in Agusti and to govern its citizens. Scarcely six months have passed, and yet Grannvale's ruling administrators have already grown arrogant and have taken to abusing their power over Agustria for their own gain. Day by day, the Agustrian people grow ever wearier of Grannvale's actions. Before long, as he feared, Sigurd finds himself yet again caught in a new conflict. Reports abound of Chagall raising his army anew at Madino Castle, vying to reclaim his lost capital from Sigurd. Further north beyond Madino, the reviled pirates of Orgahill prepare themselves to sweep in and profit from the land's chaos. Belhalla's orders demand that Sigurd must maintain control of Agusti above all else. Sigurd's heart lies heavy in the face of the impending crisis. Southwest of Madino, Eldigan's forces hold the defenses of Fort Silvail. The looming battle for Agustria... A trial between friendship and loyalties. Before Sigurd looms a final battle in Agustria's north: a showdown fated to shape the course of Jugdral's history.”
—Opening Naration

After capturing Madino Castle, the player will primarily battle mounted units. Because these forces come from Silvail Castle, the player should have units ready to intercept them in the west. Make sure to include Lachesis in this western unit to talk to Eldigan. Although the Cross Knights will remain after his departure from the battlefield, they will no longer be supported by his five-star Leadership. After Eldigan's death, a group of Dracoknights will appear at the edge of the map north of Silvail and fly towards Sigurd's army. They are lead by Papilio. Mages, archers, and a swordfighting unit with the Wing Clipper can make short work of them.