Liprica is a background character from Fire Emblem Gaiden and its remake, Fire Emblem Echoes: Shadows of Valentia. 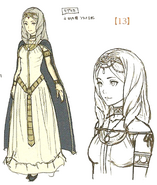