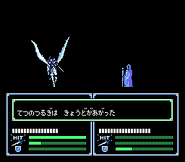 The Helarn Staff
Add a photo to this gallery

A Prototype version of the battle animations. A Bern Mage is attacking Shanna with Thunder.

Ninian's dance prototype icons.
Add a photo to this gallery

Portraits in the Prototype Version of Fire Emblem: The Sacred Stones.

An early version of Vanessas portrait, slightly different from the portrait used in the beta.

An early Battle Animation of Eirika in the Prototype Version of The Sacred Stones.

An early Animation of Eirika performing a back flip.

Breguet battling an "other unit" Cavalier (instead of a Mercenary as seen in the final version) in Chapter 1.

A player unit Female Myrmidon and Shaman were seen in Chapter 2. 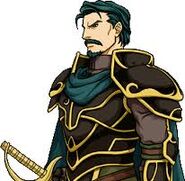 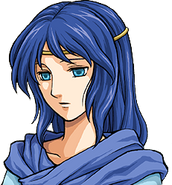 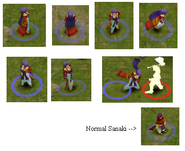 Ike fighting a Deros soldier and had his name as Paris. 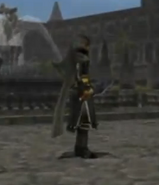 Unused Palette of a generic Assassin.

The unused Rexcalibur.
Add a photo to this gallery

Caeda's unused portrait without her armor.

Minerva's unused portrait without her armor.

Midia's unused portrait without her armor.

My Unit Registration in Shadow Dragon.
Add a photo to this gallery

An unused conversation between Katarina and Kris about if he/she has somebody important in their life in Prologue VII.

Gotoh's unused stats.
Add a photo to this gallery

A placeholder portrait for a Risen Soldier, as seen in the Japanese trailer.

The generic ally map icons of the two Cavaliers (Stahl and Sully) with helmets, Vaike's Fighter icon, Virion's Archer icon, and Lissa's Cleric icon appearing in yellow, instead of the blue icons that were used in the final version.

A female ally Cavalier with a helmet (either Sully, or another unit) helping Chrom fight an enemy Barbarian in battle.

An ally Archer with a helmet (either Virion or another unit) fighting an enemy Barbarian in battle, as seen in one of the trailers.

Sumia as a Cavalier, shown on the presentation of the Japanese version of Fire Emblem Awakening in September 2011. Sumia cannot reclass to Cavalier in the final version of the game. Also note that she retains her pink outfit worn under her pegasus knight armor, instead of wearing the standard female Cavalier armor.

Frederick's unused portrait, as seen in his critical cut scene during a battle.

Lon'qu's unused portrait of his critical cut scene during a battle, using the Astra skill. 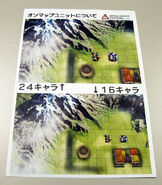 Early graphical testing for Awakening. Note the arena. Also note the different sprites used for different zoom level, the closer zoomed in, the more detail shown on the sprites.
Add a photo to this gallery

Every character has an ending and paired ending in Revelation when they survived, but not every character survives, is capable of supporting others, or even joins at all.

Although Berkut and Fernand are not playable in the final game, with the latter being playable only in two DLC maps, he and Berkut both have full voice files in game data as playable units, including unique battle, eating, level up, death/retreat and post-battle mourning quotes, all of which are fully voiced in Japanese and English, suggesting that both were cut late into development. As a unit, their critical quotes are the same ones that he uses as a boss. While Fernand is playable in the Rise of the Deliverance DLC, he cannot level up and his mourning quotes can’t trigger.

Every unit in the game is assigned a hidden age stat, which has no use by itself but is related to an unused item property which would have prevented provisions from being consumed by units whose age is less than 20. Rather than the age function working as a simple yes/no flag, every playable unit is assigned an age that is realistic for the character:

This was most likely intended for the four alcoholic provisions - the wine, ale, leftover ale, and Ram Wine - which in the final game are the only provisions that cannot be consumed by anyone at all, instead only being sold or offered up to Mila statues in Shrines to cure the fatigue of the player's party and restore uses of Mila's Turnwheel. This may have been removed because it provided an inherent disadvantage to underage units. As a side effect of being left unconsumable, the four alcohols all have recovery values programmed in that go unseen and unused: the wine, ale, and leftover ale would all restore 10 HP and 10 fatigue points each, while the Ram wine would restore 30 HP and 20 fatigue points.

Several playable characters have recorded mourning quotes for the end-of-battle results screen that are intended to play if Celica died in the preceding battle. They ultimately remain unused, since her death instantly results in a Game Over, regardless of the stage.

Retrieved from "https://fireemblem.fandom.com/wiki/List_of_unused_content_in_Fire_Emblem?oldid=557898"
Community content is available under CC-BY-SA unless otherwise noted.