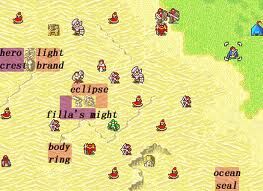 Hawkeye (Arrives at the end of Turn 1, speak with main lord)

Chapter script
[view]
“The Nabata Desert. A wasteland of scorching sun and frigid nights. It rejects human life. Any careless enough to enter its embrace is doomed to wander lost. Uther, the marquess of Ostia, spoke of a living legend… Guided by his words, Eliwood/Hector heads straight into the desert.”
—Opening Narration

Living Legend is Chapter 22E/23H of Fire Emblem: The Blazing Blade. This chapter takes place in the Nabata Desert.

If you recruit Hawkeye (during the chapter, rather than after) and the sum of your units' experience gained for this level is 700 Exp or greater, then you will unlock Chapter 22xE/23xH, Genesis. If you are trying to do this, it helps to rescue Pent so that he does not kill too many enemy units; Ninian's dancing ability, at ~10 Exp gained per use, also helps increase your Exp total to the desired amount. Also, because Pent can be hard to rescue while still getting all the items buried in the sand (As it probably requires the use of one of your flying units), it is okay to let him get a lot of kills as long as you are using any of the dancer type units later on. This is because you can use the Filla's Might and Ninis's Grace rings with Ninian to gain 20 exp. per use for her.

On Hector Hard mode, a sandstorm will cover the map, creating the same effect as Fog of War.

Pent, a Sage, came to the Nabata Desert in search of some unknown treasure. He is being attacked by bandits and their leaders, brothers Jasmine and Paul, who are warriors, threaten to take the treasure from Pent. Eliwood, Hector, and Lyndis have come to the desert in search of the 'Living Legend', also known as Archsage Athos, and they go help Pent. Hawkeye, a berserker, will appear after Pent's first turn as a green unit. He can be recruited by talking to him with your main Lord; otherwise, he will automatically join at the start of the next chapter.

In Hector's mode, Rath will fulfill Canas' role as the character who talks to the tactician, should he be employed in the chapter. However, he will not mention the hidden treasure at all.

This is your stereotypical desert level. Everyone (except a few units) will be drastically limited in their movement. Units on horseback (ie. Cavaliers, Troubadours, Paladins, etc.) will be affected the most drastically, so leave them behind.

Obviously Eliwood or Hector (depending on the mode you're playing) is mandatory to have. Serra makes a good replacement for Priscilla, and her movement is not very limited. This is the same for all magic users, so Canas, Lucius, and Erk are recommended.

Matthew and Legault are practically necessary if you want to find all of the things in the sand (all of which are extremely rare otherwise).

Florina and Fiora are the other units that are unaffected by the sand. Heath could make a viable substitute for either of these, but there are so many archers and magic users (to both of which he is vulnerable) that it is dangerous to bring him in.

Oddly enough, your main problem in this level might not be losing, but winning too quickly. Unlike most annoying rescue missions, Pent is actually too strong, and he will likely hog lots of experience if left unchecked and make accessing the sidequest nearly impossible. (Note: If you bring Ninian, you can use her to hoard the remaining experience.) He can easily blow through all of the enemy units excluding the bosses. It is not uncommon for him to go through around 5 to 10 enemies on the first turn, although in Hector's story, he won't kill as many enemies, due to him starting at the edge of the map, rather than the middle.

Make sure that you rescue him because he will engage the bosses. They could cause him some trouble and if Pent dies, you get a game over. Paul especially will be dangerous because of that Killer Axe. By the time you rescue Pent, there should only be a handful of enemies left.

Once Matthew and/or Legault have found all of the objects in the sand, confront the bosses. Be careful as you approach them because they will move if you come within their range.

The most obvious strategy would be to recruit Hawkeye when he appears, who is a direct counter to the bosses.

Another effective, but turn consuming strategy is to use a flier to take Lyn to the fortress to the left of Paul. Because of the weapons triangle advantage, he will almost never land a hit. However, his Killer Axe means that when he DOES hit, he can one-shot even Hector, so have your magic units attack him from a distance. Repeat the process with Jasmine, who is significantly less dangerous, and the level is won. Do not forget to steal Jasmine's Guiding Ring if you want it.