Kaiji Tang
[view]
“Granted, you don't seem like a bad sort. However, the Fangs' judgment cannot be undone. It is time for you to die.”
—Lloyd, before attacking Eliwood in The Blazing Blade

Lloyd, full name Lloyd Reed, is a non-playable character in Fire Emblem: The Blazing Blade. He is also known as the White Wolf, and is a skilled swordsman belonging to the Black Fang.

He is the older of Brendan Reed's two sons and the brother of Linus. He is also a member of the dreaded Four Fangs, the most powerful members of the Black Fang.

Not much is known of the Swordmaster, though it is likely that when his father, Brendan, formed the Black Fang, he was taught the craft of the sword and eventually became a skilled swordsman. Along with his brother, the Mad Dog Linus, he became one of the legendary Four Fangs. Later, the Valkyrie Ursula and the Assassin Jerme joined them, though Jerme was soon replaced in favor of Nergal's top assassin, Jaffar. Sometime after Nergal gets wounded, he sends his morph, the seductive Sonia, to persuade Brendan to order the Black Fang's Four Fangs to slay Eliwood, Hector, and their companions. Sonia easily convinces the leader to issue his orders, though three of the four fangs, Linus, Ursula, and himself, are suspicious. Despite this, they are forced to comply.

Should the combined levels of the three lords, Eliwood, Hector, and Lyn, total 50 or higher, they will arrive in a town in Bern. Shortly after, Linus and himself trail after them. Lloyd gives Linus explicit instructions not to confront the lords, though, impatient and impulsive as he is, Linus attacks the lords but loses. He runs off after they spare him but is confronted by Limstella, one of Nergal's morphs. The morph quickly drains the quintessence of the Hero, killing him instantly. Shortly after the skirmish, Lloyd finds his brother killed, and vows vengeance on the lords. Lloyd will then be seen guarding the shrine of Bern, confronting the lords only with the notion of either avenging his brother or dying and joining him.

Should the total level of the three lords be under 50, Lloyd and Linus will encounter the lords in a foggy valley in Bern. Lloyd sends Linus off to report that they've located their targets and he fights the lords alone, but is eventually bested after a fiery skirmish, though is spared by the three. He, in turn, spares them, though after departing, he is confronted by Limstella, one of Nergal's morphs. The morph quickly drains the quintessence of the Swordmaster, killing him instantly. Linus later finds his body and swears vengeance on the lords. If this path is chosen, Linus will guard the shrine of Bern.

Despite all possible paths, Lloyd is resurrected by Nergal in the Dragon's Gate, along with Linus, Ursula, Jerme, Darin, Uhai, Kenneth, and his father, Brendan Reed.

Lloyd is the calmer and more level-headed of the two Reed brothers. Though wary of Sonia's influence on his father and the Fang as a whole, he was nonetheless resolved to remain behind with them so as to try to learn the truth of the matter for himself. Following Linus' death, he became depressed and fatalistic, wishing for nothing more than to join his brother in death. When together with Linus, Lloyd often reins in his younger brother's more rash qualities by serving as a voice of reason. If he is defeated early in the game, Lloyd is honorable and lets the lords go in peace after learning they weren't as bad as he was initially lead to believe. This could have converted both him and Linus to the lords' side had Limstella not killed him. Before the conflict with the lords, he and his brother got along well with several of the Black Fang members, including all of the Four Fangs and several other high-ranking members, such as Uhai. He also doted on his younger step-sister, Nino.

Help Description (Morph): A morph made in the form of the White Wolf, Lloyd.

White Wolf
A member of the Black Fang assassins. Delivers justice to those they deem criminals. Known as the White Wolf. Son of the group's leader. Appears in Fire Emblem: Blazing Sword.

Lloyd is illustrated in the trading card game Fire Emblem Cipher with the following cards: 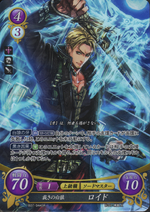 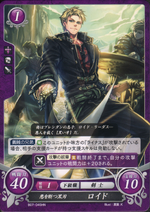 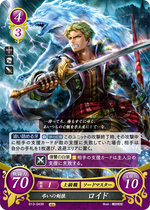 Lloyd means ‘grey’ in Welsh. His brother Linus's name also means ‘grey.’ Perhaps this alludes to the fact that the brothers are neither "good" nor "evil," but add shades of gray to the game's story. Reed is a variant of the English name ‘Reid’ meaning ‘red’.