Lloyd is a capturable boss character from Fire Emblem Fates. Together with his older twin brother Llewelyn, Lloyd continues the Archetype of twin bandits that is prevalent in the Fire Emblem Series. They are the first of the bandit twins to become playable in the series, albeit only through capturing them via Orochi or Niles' personal skill.

Lloyd appears with Llewelyn as an optional Boss in Kana's paralogue. Lloyd and Llewelyn stumble onto the battlefield at Turn 8 where they witness Kana in his/her dragon form. Impressed by their power, the Bandit Twins plan on capturing Kana with the intention of making him/her into their pet. Corrin can choose to either kill them or capture them. If the player defeats the invisible forces before Turn 8, Lloyd and Llewelyn will not appear and cannot be encountered on any other map.

Lloyd and Llewelyn also appear in the DLC episode Ghostly Gold, where they are charged with the task of guarding the relics that are located in some ruins. When the relics begin to be smashed by invisible assailants, the brothers, driven into a state of fluster, hire Corrin and their army to guard them while they get a well-deserved slumber. Following the conclusion of the ensuing battle, both brothers express surprise to learn that ghosts are responsible for pillaging the ruins. As a means of expressing their gratitude for Corrin's service, the brothers permit them to retain the gold that has been gathered throughout the battle.

Lloyd and Llewelyn also appear as the main antagonists of the DLC episode Anna on the Run, where they appear as hostile leaders of a pirate gang. In the episode, the twins, alongside twelve of their other brothers, embark on a search to locate Anna, who had come to reclaim an Arms Scroll that the two had stolen from her.

They also have a random chance to appear in the DLC Museum Melee, as visitors from another world, where the player can capture them there if they didn't in Kana's aforementioned paralogue.

Xenologue 10 - Anna on the Run

Lloyd is a glass cannon in the truest sense of the term, featuring impressive physical offensive capabilities that are heavily offset by his abysmal defenses. His HP growth is, however, ludicrously high, a fact that lightly remedies his poor defenses. The only skills Lloyd has access to in Normal mode without reclassing are Rally Strength, Axefaire, HP +5 and Gamble.

Lloyd's only normal reclassing option is the Hero class, which grants him access to the Sol and Axebreaker skills, both of which serve to further amplify his combat prowess, Sol grants Lloyd the ability to replenish his HP when attacking enemies, a fact that will greatly help him offset the heavy damage that he is very likely to sustain. Axebreaker, on the other hand, will only give him the upper hand in battle when facing against Axe and Club-wielding opponents.

“That dragon's mine! I'm going to name it Llizardface!”
—Lloyd's pre-battle quote.
“Urrggh... So much for Llizardface.”
—Lloyd's defeat quote. 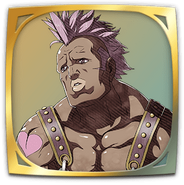