“No, it was because of my mistake in trusting Istoria that so many lives were lost in the Balt War... I owe an apology to all of the citizens of Wellt whose sons, brothers, husbands, and fathers died because of my folly. I shall see the Empire brought to ruin, even if it means my life! I have endured my shame and lived on so that I can see it through.”
—Loffaru, in a conversation with Runan

Loffaru (ロファール Rofāru, fan translated as Raphael) is a playable character from TearRing Saga: Utna Heroes Saga. He is the king of Wellt, the second husband of Liza, and the father of Sasha. He is also one of the Twelve Heroes who fought in the Leda Liberation War.

One year prior to the game's events, Loffaru left Wellt in order to fight in the Balt War, but was later presumed dead because he did not return. In truth, he survived, but was placed into a coma and found by Barbaross, who left him in Clarice's care.

Some time after his recovery, he receives aid from Runan's army and enlists in it. Before the third route split, he reveals to Lionheart that he intends to declare Liza's son as the next king of Wellt, as he does not wish for Sasha to inherit the throne.

In the ending, Loffaru and Sasha return to Wellt and reunite with Liza.

He appears as an NPC unit in Map 19. To recruit him, have either Runan or Sasha speak to him, or make sure he survives the chapter.

Loffaru has an immediate advantage when he joins the player's army, as his class is arguably the best in the game: possessing the same caps as the Gold Knight, and able to use all weapon types. Unfortunately, his growth rates are poor, and his base stats are fairly mediocre save for his high level. However, they are still good enough so that he will not be a hindrance. Loffaru also supports a fair number of units, including Runan and Sasha, which can be helpful. He will not be the best unit on the team, but can serve as a solid endgame crutch if necessary. 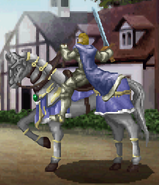 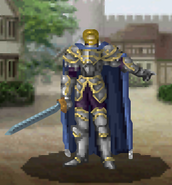