Xenologue 2: The Brink of Chaos (posing as Bruno, Anna, Alfonse, and Sharena)

Erika Ishii
[view]
“What do I want? The joy of destroying worlds, and spreading chaos... Would you rather stare at a stone sitting by the side of a road, or watch it tumble down a cliffside? As it tumbles, it may, of course, crumble into dust... And yet....”
—Loki to Marth in the Tempest trials

Loki is an antagonist from Fire Emblem Heroes. She is first introduced by apparently disguising herself as Bruno, Anna, Alfonse, and Sharena. She initially keeps her true form hidden, but appears as her true self in Book II of the main story where she fights Sharena in the opening cinematic.

In Xenologue 2, she is seen discussing the Tempest with Veronica while disguising herself as Veronica's brother Bruno. Veronica quickly sees through her disguise and questions her true identity; as she knows that her brother is elsewhere. She then takes the forms of Sharena and Alfonse while expressing her surprise at her seeing through her illusion so quickly before she decides to settle on Anna's appearance. She tells Veronica that her name is Loki and also tells her that she will have to wait if she wants to see her true form. Loki mentions the rite for the Tempest, and Veronica agrees to do it. She expresses joy at seeing that Veronica knew about the Tempest all along and also tells her that she likes her.

First appearing in Chapter 1, Loki is about to finish Fjorm, when the Order of Heroes confronts her. Removing her disguise and revealing her true form for the first time, she challenges the Order. After she is defeated, Loki is forced to retreat, noting that she has taken an interest in Kiran.

She returns in Chapter 2 to challenge the Order again, and this time she allied with King Surtr and Laevatein. Though she and Laevatein are defeated, her king was unscathed, as no weapons can harm him.

From then on, she assists Surtr in keeping tabs on the Order, until Chapter 12 reveals that Loki had been disguising herself as Ylgr and spying on the Order since Helbindi's first defeat. Alfonse, Hríd, and Kiran eventually see through this, and another fight ensues. After being defeated again, she reveals that Veronica and Ylgr are in Surtr's castle waiting to be sacrificed to the Rite of Flames and gives them a map to a secret entrance. When Alfonse asks why is she aiding them, Loki replies she has motives of her own and that she is not interested in Veronica dying yet. Considering her part done, she then wishes them good luck, noting that regardless of the outcome, she'll be watching.

After the conflict in Muspell, Loki heads to Embla where she tells Veronica about Hel's invasion. While Veronica is tempted to kill her as she betrayed her to Surtr, she restrains herself as she's more worried about the dead invading Embla and that Bruno hasn't returned from his quest. When Veronica asks if she's behind this, Loki declares that she had no part in the invasion and brings up the fact that Askr and Embla may have to join forces to stop the dead.

In Chapter 7, Loki sees Veronica return from a scouting mission. Upon hearing Veronica couldn't kill the reanimated soldiers, Loki states that such a thing is impossible so long as the Death Sovereign reigns. Upon hearing this, Veronica bluntly asks her how she can get into the realm of the dead to kill Hel herself.

During Paralogue 23, Festival of Hoshido, Loki looks into the dragons of black and white of the two nations. Though she finds they have left the world, she speculates about the third dragon that is neither white nor black as an ally.

Loki appears in Paralogue 26, Brave Redux, as an alternate of her main counterpart. Aversa realizes that Loki is not human and has a similar presence to Grima.

While child Azura seeks an escape from her harsh reality in Nohr during Paralogue 27, Adrift, Loki appears before the girl to convince Azura to aid her. She teaches her about probability and the capabilities of looking for the possibility one seeks among infinite ones, though Azura intervenes and stops her younger self from taking the deal. Before leaving Loki warns Alfonse that if he does not learn to understand the power to open gates to worlds he will be destroyed by it.

In Xenologue 4, Loki mentions her go to enter the realm of the dead as the nine worlds tremble before the change caused by Surtr's death and the Order of Heroes growing in power as she plots something involving the King of Askr.

In Xenologue 5, after Hel has been defeated, Loki (who appears to be tired) starts to taunt the Order of Heroes. After a short skirmish, Loki tells the heroes that a group called the dökkálfar are the real threats. She eventually vanishes but tell them to look for her again once they wake from their "dream."

Shrouded by the Storm

Loki appeared disguising herself as Fjorm where she meets "Marth". As "Marth" tries to get her to trust him, she tries to get him to hand over his Falchion to her, only to be stopped by the real Fjorm. After her plan was foiled, Loki reveals her true form, challenging "Marth" and Fjorm as she waits for them in the depths of the Tempest.

Loki appears to be having a chat with Laegjarn in regards to the upcoming Bridal Festival. Laegjarn begin's to question Loki's motives, suggesting that Loki has an ulterior motive in mind. Loki leaves to enjoy the Bridal Festival, but not before Laegjarn warns her that if she inflicts any harm onto Laevatein, that Laegjarn herself will be the one to get revenge.

At the end of the Tempest, Loki appears to be talking to herself, dismayed that the festival is over, and how she wasn't done with the brides. However, she knew that Laevatein was eavesdropping in the background and calls her out, asking if Laegjarn had put her up to the job, to which Laevatein denies. She warns Loki that if she hurts Laegjarn, Laevatein herself will take vengeance. Loki then comments on how strong the love between the two sisters, and slyly asks as to why the two just don't open up to their own mother, to the shock of Laevatein. Loki jokes that she is the mother of the sisters, though she does not continue the ploy for very long. At the end, she assures Laevatein that she herself shares the same goal as their father: The destruction of Askr.

At a spring where the souls of the dead gather, Loki brings a large number of them together, creating Røkkrs. At this time, she is approached by Thórr, to which Loki is surprised to see around and about. Thórr does not approve of Loki's actions, preferring to remind her of her responsibilities, Loki shrugs, casually responding that indeed they work for Alfaðör, the creator of everything.

Truly an enigma even when in her original form, Loki behaves in a fashion that is playful and mischievous, traits checked by a sadistic pleasure in watching the suffering and confusion of her foes, changing her appearance and personality in order to throw them off-balance. This extends to her allies as well, as she acts as aloof and caring, but isn't afraid to provoke and act behind their back for her own amusement and whim.

During the mini Tempest Trials "Shrouded by the Storm", Loki expresses a disdain for stagnation, comparing the tempests to a stone on the road when speaking to "Marth", hinting at an impatience embedded within Loki's personality, although it is one that she does not overtly express frequently.

Spring Trickster
Mysterious woman who operated behind the scenes as Múspell's tactician. Appears at the Spring Festival as a bunny...yet her true objective remains unknown to all.

Loki is illustrated in the trading card game Fire Emblem Cipher with the following cards: 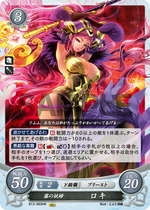 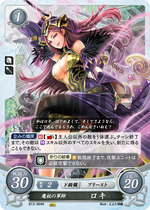 "Loki" was the name of a god, born of two giants, known for his mischief in Norse Mythology, and both him and this character share the ability to deceive others by disguising as other people. Loki in myth was sentenced for murder by imprisoning him beneath the earth, his arms and legs bound with his sons' hardened innards, and have a snake hover over his head, dripping his face with scalding venom. Loki in Heroes being female is a reference that Loki in myth is gender-fluid, willingly able to turn male or female. Loki in Heroes is the second character named after this Norse figure, with the first being Loptous in Genealogy of the Holy War.