Baron
[view]
“Hey, I'll send you to Byron. He must be getting lonely by now.”
—Battle Quote with Sigurd in Genealogy of the Holy War

Lombard is an enemy character from Fire Emblem: Genealogy of the Holy War. He is the duke of Dozel in the first generation, and is the father of Lex and Danann, alongside being the grandfather of Brian, Iuchar, and Iucharba. As a direct descendant of Crusader Nál, he wields the legendary axe Helswath.

In the course of the game's events, Lombard schemes with Duke Reptor in a conspiracy to obtain more power. When Prince Kurth returns from the war in Isaach, Lombard assassinates him and frames Duke Byron of Chalphy, his son Sigurd, and Duke Ring of Jungby for the crime. He also mortally wounds Byron and destroys Chalphy's Gruenen Ritter.

In Chapter 3, Lombard is seen entering the domains of northern Agustria to arrest Sigurd on charges of supposedly assisting in overthrowing the Grannvaleian throne and aiding in the murder of Prince Kurth. This forces Sigurd's army to escape into Silesse, where they spend a considerable amount of time in hiding. Lombard reappears again in Chapter 5, leading a large army of Grannvaleian soldiers against Sigurd's army. Lombard eventually falls in battle while defending Lubeck from Sigurd's forces.

Lombard is also shown, in the beginning of Chapter 5, to express disgust towards Andrey for killing Lord Ring, whom he apparently holds in rather high esteem.

Lombard is a force to be reckoned with, as a result of possessing the Helswath axe. As this axe drastically raises his defenses, only characters with massive attack powers should be utilized to face off against Lombard in battle. Such characters include Lewyn with the Forseti tome, Brigid with the Yewfelle bow, Sigurd with the Tyrfing sword, and Chulainn. The player should also be warned that the Helswath axe is capable of being used as a ranged weapon, and as such should not let his/her guard down when attempting to attack at a distance. The only one of his successors to use the Helswath is Brian.

“Gwahaha... weaklings. As long as I have my Helswath... No matter how many of you come, you'll all suffer the same fate! If you don't want to die, stay away!”
—Lombard's default battle quote in Genealogy of the Holy War.

Lombard: Gwahaha... the kid's made it. Hey, I'll send you to Byron. He must be getting lonely by now.
Sigurd: Lombard! I'll never forgive you for what you did to my father!!

Duke Lombard appears quite similar to his game counterpart, but the origin of his greed for power was delved further: He felt that it was unfair that in the past the Twelve Crusaders were treated as equals, only to be playing favorites with the descendants in the present day. He also used to be a loving father to Lex, but when he was asked about that unfairness, that was the point Lombard became cold and distant to his son, driving a wedge between them. By the end of his life, Lombard came to accept that Lex can move on as his own man, but warns him that if he ever turns back from his path, he will be waiting in Hell.

Lombard is illustrated in the trading card game Fire Emblem Cipher with the following cards: 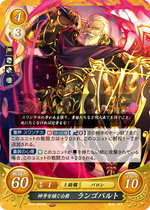 Lombard is a corruption of Langobard, Germanic people who were originally from Northern Europe and later settled in central Italy. The name "Langobard" originated from the length of these people's beards, with the Latin words of longus and barba meaning "long" and "beard" respectively.

Artwork of Lombard in Fire Emblem 0 (Cipher) by Yoneko.

Lombard, as he appears in the first series of the TCG as a Level 1 Baron.

Lombard as a Baron in Fire Emblem 0 (Cipher).

Lombard's portrait in Genealogy of the Holy War