Axe Paladin
[view]
“Who is in charge here, my lord? Must you follow Zelgius's orders?”
—Lombroso to refuse Zelgius's order to ceasefire for three days.

Lombroso is a high ranking soldier Serving both The Begnion Senate and Begnion Central Army. He is ordered to attack Castle Seliora where the Greil Mercenaries were residing in, despite the three-day truce that General Zelgius offered to the Laguz Alliance being in effect. Like most Begnion Generals, he resents the Laguz tribes.

Lombroso leads the siege of Castle Seliora in Chapter 3-5: Retreat! under the orders of an unnamed senator and was probably the general of the unnamed senator's personal army. His forces are ultimately defeated by the Greil Mercenaries, who were left in Castle Seliora after the three-day ceasefire was announced. He either dies in combat or is ordered to pull out by Levail, never to be heard from again.

While playing only a minor role in the game's plot, Lombroso proves himself a cruel individual who does not care about maintaining peace and hopes to see an end to the Laguz tribe after the war concludes. Like many Senators, including the one he speaks to, he dislikes Zelgius. He attacks the Greil Mercenaries in spite of Zelgius' orders for a three-day armistice with the Laguz Alliance, and calls Zelgius a "sanctimonious has-been" in his battle conversation with Ike.

He carries a great deal of pride, ignoring tactics and planning under the belief that numbers alone would give him victory. He also places a great deal of emphasis on social status; in the game's extended script, he attempts to ignore Levail's orders despite recognizing as the Duke of Gaddos' general, on account of his lower social status. However, he is forced to comply once Levail reminds him that, as Zelgius' appointed adjutant, he now outranks Lombroso.

“The outcome of a battle depends solely on the number of troops in the field! Tactics and skill are nothing in the face of sheer numbers! Wait, are you laughing at me? Gah! Die, you insolent cur!”
—Lombroso's pre-battle quote

Lombroso is a surname from the Sephardi family. 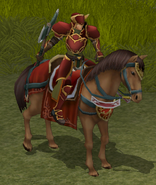