The Longbow (Japanese: ロングボウ) is a Bow that recurrently appears across the Fire Emblem series. This bow is one that uniquely possesses a range of 2-3 as opposed to the usual 2, at the cost of significantly lowered Might and Accuracy.

In Radiant Dawn, three variants of the Longbow exist: Iron Longbows, Steel Longbows and Silver Longbows. The unique attribute of these bows essentially becomes redundant when a Sniper promotes into a Marksman, a class that permits relevant units to target enemies up to a maximum range of three spaces. In Path of Radiance, Shadow Dragon and New Mystery of the Emblem, the Longbow is locked to the Archer class-line, while other iterations of the weapon can be wielded by any bow-wielder, provided that he/she boasts at least a D rank in Bow mastery.

Concept art of the Longbow from Path of Radiance.

Rolf wielding the Longbow in Path of Radiance.

Noire wielding the Longbow in Awakening. 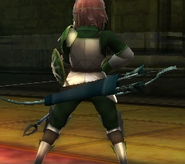