Dark Dragon (as Himself)

[view]
“GHARRGH... SELIPH... HEAR ME WELL... SO LONG AS AVARICE LURKS STILL IN THE HEARTS OF MEN...I WILL RETURN... COUNT ON IT... THE HEARTS OF... GAAAAHHhhhh...”
—Loptous speaking to Seliph through a dying Julius

Loptous, translated as Loptyr in the Awakening SpotPass content, is the overarching antagonist and final boss (while taking over Julius' body) in Fire Emblem: Genealogy of the Holy War. Loptous is a dragon from the continent of Archanea who is known as the Dark God by the people of Jugdral, belonging to one of the most powerful tribes, rivaling even the Divine Dragons, the Earth Dragon tribe.

In the past, the dragons were well flourished and ruled the lands, but everything changed when the dragon race began to decline and slowly degenerate.

To avoid facing extinction, Naga, the leader of the Divine Dragons, proposed to all the other dragons that the dragons surrender their rule to the slowly flourishing humans as they take on human forms themselves by sealing their dragon powers into a Dragonstone. However, this was rejected by Loptous and the other Earth Dragons, who saw humans as nothing more than insects. This refusal to become Manaketes resulted in the rest of the Earth Dragons, save for the Earth Dragon prince Medeus who did become a Manakete, to degenerate into madness. Loptous somehow hadn't yet succumbed to the degeneration at this time.[1]

As the rest of his kind became feral beasts, they began to attack humans, which forced the Divine Dragons to intervene on humanity's behalf, and this led to a war between the two tribes.

It was during the war that Loptous soon came across a human, hailing from Jugdral, who went by the name Gair, an ambitious man that sought to acquire the great powers of a dragon. Loptous, knowing that the war would lead to his tribe's defeat, and figuring that through Gair, the Earth Dragon could unleash his hatred upon humanity further than the war could, agreed and formed a blood pact with the bishop, and encased his powers and will into an unholy tome that was named after him.

Loptous soon lost his physical form but was now able to possess and enforce his will into Gair, who had his blood. Upon entering Jugdral and using his powers, Loptous, through Gair, had formed the Loptr Church, a religion where Loptous was their god. Later on, with their newfound powers, the Loptrian Empire would be formed and Gair would be the first emperor of it. It was then that Loptous was able to unleash his terror upon the humans in Jugdral, where he had countless humans slaughtered, and child hunts organized to be sacrificed to him. His reign of terror continued to last as Gair's descendants would all be possessed by Loptous for seventeen generations before Loptous’ existence finally came to be known by Naga.

Eventually, a huge revolution occurred through Jugdral as people began to oppose Loptous and his empire. Despite this, they were no match for Loptous’ powers, until the Miracle of Dahna occurred, where Naga and 11 other dragons came from the heavens and performed a blood pact with 12 other warriors, and giving them holy weapons to combat the Empire. The twelve warriors that would combat Loptous were known as the Twelve Crusaders, and led by Heim, who possessed Naga's power. Eventually, Emperor Gair XVII was slain by Heim, and Loptous was seemingly vanquished upon the loss of his vessel.

However, Loptous’ bloodline had not actually been vanquished, as years before the Miracle of Dahna, one of Gair's descendants that had not inherited major Loptous blood, Maera, who was the younger brother to the Gair successor, had actually been the key to the survival of Loptous’ bloodline. Due to not possessing the cruelties of the Loptous Empire, Maera had sided with the people, and soon led a rebellion on the Empire, which was defeated, and Maera was exiled. However, this is precisely what allowed Loptous’ bloodline to continue, eventually reaching one child that would play a role in Loptous’ rebirth: Cigyun.

While she was prohibited from ever having more than one child, Cigyun ultimately gave birth to two children, the first with her husband, Duke Victor of Velthomer, and the second through an affair with Prince Kurth. Her two children, Arvis and Deirdre, both inherited minor Loptous blood.

This led for the leader of the surviving Loptrian Cult, Manfroy, to manipulate events that made the two half-siblings marry, leading to the birth of twins: Julius and Julia. While Julia inherited major Naga blood, Julius instead carried major Loptous blood, as Manfroy predicted. As such, at a certain time, Manfroy had given Julius the tome that contained Loptous’ powers and will, thus allowing Loptous to possess Julius, allowing the Earth Dragon to once again plunge the continent into disarray. While Loptous first tried to eliminate the remaining Naga descendants, Julius' mother was able to warp Julia away while she herself perished.

Through Julius, Loptous worked to rebuild the Loptrian Empire, but was later met with opposition from Julius' half-brother, Seliph, who had formed a liberation army to overthrow the Empire. Julius was not afraid of them, though, as his only fear from Loptous was of those that possessed Naga's blood, the remaining threat being his sister. Despite later getting Julia back and wanting her dead, Manfroy convinced Julius to keep Julia alive to make use of her, something which would ultimately have been a fatal error on his part.

After Seliph killed Manfroy and saved Julia, she soon obtained the Book of Naga, before confronting her brother. As Julius was killed by his siblings, Loptous took control of Julius completely. To Julia, he curses Naga for bringing ruin to him once again, and to Seliph, he warns that so long as mankind has greed in their hearts, he would return once again. As Julius died, Loptous’ spirit left with a roar and faded into nothingness.

Despite claiming that he would return, there are no known living descendants who carry his Holy Blood, however there is several persons who could pass it down (with one of them likely having his holy blood). Nonetheless, in the games which happen in the same chronology as Genealogy of the Holy War, Loptous was never mentioned to have returned.

"Lopt" was an alternative name for Loki in Norse mythology. During the development of Genealogy of the Holy War, Loptous was originally planned to be named Loki.

The "Tyr" in his Awakening name of Loptyr was the name of a Norse God of war.

Artwork of Loptous and Naga from the Super Tactics book.

Loptous and Julius in the Trading Card Game.

Loptous summoned by his namesake tome in Genealogy of the Holy War.

Loptous summoned by his namesake tome in Heroes.

Loptous' map sprite from Genealogy of the Holy War 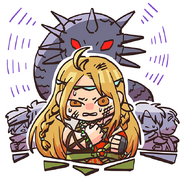