50
[view]
“That night... The night Manfroy came with that eerie black tome... Nothing was ever the same again. My real brother, the kind and caring boy I once knew and loved so, died that night. In his place stood a demon of terrifying power... My brother in name only.”
—Julia, to Julius

Loptous is a Dark magic tome from Fire Emblem: Genealogy of the Holy War. The personal tome of Julius, the final boss of the game, Loptous is a vile and potent spell that allows the Dark Dragon Lord Loptous to possess its user. This spell possesses the unique effect of halving the attack power of enemy units before defenses are applied. This effect may only be nullified by the Book of Naga.

The Loptous tome's first major influence to the plot of Genealogy of the Holy War takes place during the period separating the first and second generations, where Manfroy, on a visit to Belhalla Castle, presents it to the juvenile Julius. According to Julius' twin sister Julia, Julius' first interaction with the tome marks the day she last saw the endearing brother she once knew, leaving in his wake a "powerful, yet demonic child". This is presumably the result of the fell energy within the tome's pages reacting with the major Loptous blood present in Julius' body, corrupting his soul. The first result of Julius' transformation is him, trying to eradicate all traces of Naga's influence, horrifically murdering his mother in cold blood. His attempt to slay Julia is foiled by his mother, who uses the last of her strength to warp her daughter to safety.

The Loptous tome appears within the game whenever Julius appears on a battlefield, including Chapter 10 and the Final Chapter, where he equips it as his weapon of choice. The events of Chapter 10 sees him wielding the tome while playing a twisted game with Ishtar to see who can slay a member of Seliph's army before the other does. The tome makes its last appearance in the Final Chapter, where Julius faces Seliph's army in a conclusive showdown with the tome of Loptous on hand. His defeat causes the evil soul of Loptous to leave his body and disintegrate.

This tome references the character of the same name, "Loptous". In turn, that character is sometimes refered to as "Loptr", which is an alternative alias for Loki, the Norse god of mischief who was also a jötunn (a giant).

Sprite of the Loptous tome from Fire Emblem Heroes.

Julius casting Loptous on Julia in Genealogy of the Holy War. 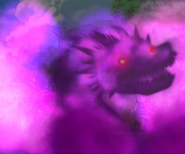