General
[view]
“If I care what becomes of Grust, than I cannot continue to stand by Dolhr. So, I will stand by you instead, Prince- and hope the future is a bit easier to spot from there.”
—Lorenz to Marth in Shadow Dragon.

Lorenz (ロレンス, lit. Lawrence; romanized as Rolence in the Japanese versions) is a playable character in Fire Emblem: Ankoku Ryū to Hikari no Tsurugi, Book 1 of Fire Emblem: Mystery of the Emblem, and Fire Emblem: Shadow Dragon.

Lorenz was a general of Grust and old friend to King Mostyn of Talys. Though loyal to Grust, when King Ludwik sided with Dolhr out of fear, Lorenz was infuriated and futilely attempted to convince him otherwise. Despite this, Lorenz didn't leave his post, continuing to lead Grust's forces alongside Camus. During the Archanean Alliance's invasion of Grust, Prince Marth of Altea and Caeda, Mostyn's daughter, convinced him to defect to the Alliance by arguing that Lorenz simply obeying his orders and siding with Dolhr would not result in any future for his kingdom nor humanity, and that instead he was preserving Ludwik's reign and Grust's future by turning against Dolhr.

After the War of Shadows and the death of Ludwik, Lorenz put Ludwick's son Yubello on the throne and became his regent, though he did not always agree with his newfound overseers in Archanea. After Hardin became Emperor of Archanea, he appointed the corrupt Lang as the leader of the occupational army in Grust, who began a reign of terror and threatened the safety of Yubello and his sister Yumina. In order to protect them Lorenz rose in rebellion against Lang and occupational army, but was branded a traitor and heavily wounded in battle. As Archanean reinforcements from Altea closed on on him, Lorenz entrusted the Grust royal siblings to Ogma's protection and sent them to seek the aid of Wendell in Macedon. However Yubello and Yumina refused to leave Lorenz's side, forcing Lorenz to send Ogma on his own. When Marth reached him, Lorenz only had the strength to explain Grust's situation to him, sacrificing his life to ensure the safety of the Grust royal siblings.

Lorenz appears as a corrupted General Mirage, and during Mamori's first side story is found in the same Idolasphere where Draug captured Barry. After his defeat, he is purified by Mamori, who remembers Draug as a comrade. He stays in the Idolasphere to continue the fight on his own after he recovers his strength.

Lorenz's prime was in the NES version due to being the only General available, as Knights cannot promote and lower stat caps (his defense is 4 points away from max). Lorenz is still quite usable in the SNES version again due to lower stat caps.

In Fire Emblem: Shadow Dragon, while he has good growths, his base stats are quite low, and he comes rather late. However, he can make a decent meat shield if a stat booster or two is used on his skill/speed. A promoted Knight will have higher stats in the end, but Lorenz can be used as a replacement.

Marth: General Lorenz, hold!
Lorenz: What? You are Marth, the Altean prince...
Marth: Yes, sir. The king of Talys told me much about you. He said you opposed Grust forming an alliance with Dolhr, right from the very start.
Lorenz: That's right.
Marth: Then fight with us! With your help, we can defeat Dolhr!
Lorenz: Forgive me, Prince Marth, but am I to just abandon my country, then?
Marth: .....
Lorenz: I know yours is the just cause. Still, I wish to remain a Grustian general, right to the end. I am fighting here because that is the way for me to honor my kingdom.
Marth: Forgive me, General, but...is it, really?
Lorenz: Pardon?
Marth: Since you are a Grustian general, then surely you fight for Grust's future first and foremost. But tell me...from where you are standing now, do you see any future for your country?
Lorenz: ...I shall have to learn to mask my misgiving better, if you can pluck them from my heart so easily. You are quite correct. If I care what becomes of Grust, then I cannot continue to stand by Dolhr. So, I will stand by you instead, Prince- and hope the future is a bit easier to spot from there.

Caeda: General Lorenz! My name is Caeda. I hail from Talys. My father has told me quite a bit about you.
Lorenz: Princess Caeda! My, look what a lovely young woman you've grown into. Your father was a good friend to me, many years ago.
Caeda: General, I heard you opposed Grust forming an alliance with Dolhr. Why didn't you try to stop it?
Lorenz: You think I did not try, Princess? Our king is meek; in the end, Dolhr proved better at cowing him than I did.
Caeda: But sir, surely you know that Dolhr intends to use the Manaketes to conquer humankind! You must act now- for Grust's sake, if not the world's! Join us, General Lorenz. We can put an end to this battle right now.
Lorenz: Hmm... What you say makes sense enough, but I serve Grust. I cannot simply betray my country.
Caeda: Ah, but what makes a country?
Lorenz: Pardon?
Caeda: Is it one man- your king? Or is it the countless innocent people who make their home here?
Lorenz: Well, that's- Hmm...
Caeda: My father has a saying: "A kingless country is a country still; but a king without subjects rules naught but hills." If you disobey your king to ensure his subjects' safety, how is that a betrayal? You are protecting his reign.
Lorenz: Protecting his reign? ...Aha ha ha, ha ha! Ahh, that mad logic! I feel as though I've shed twenty years and I'm talking to your father again. You win, Princess. I yield! I will join you, in the interest of king and country. Har!

People’s Man
Lorenz put Grust’s prince upon the throne and became his regent; but he and Archanea did not always see eye to eye.

Lorenz is the German form of "Laurentis" [1].

Lorenz as seen in the TCG.

Lorenz with Yumina and Yubello from The Complete. 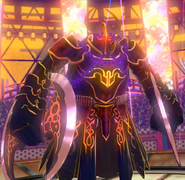 Lorenz as he appears in Tokyo Mirage Sessions ♯FE

Lorenz after being purified by Mamori.

Lorenz's portrait in Ankoku Ryū to Hikari no Tsurugi.

Lorenz 's portrait in Mystery of the Emblem.