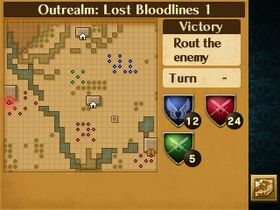 Chapter script
[view]
“Hero-King Marth—the kind King of Archanea. Seliph the Scion of Light—the noble King of Jugdral. These two kings continue their battles in the Outrealm and Chrom decides to lend a hand to Marth to defeat Seliph's army.”
—Opening Narration

Lost Bloodlines 1 (King vs. King (Emblem Side) in the Japanese version) is Xenologue 4 of Fire Emblem Awakening. The chapter takes place in Grannvale and Verdane.

Chrom joins forces with 10 Archanean NPCs (led by King Marth) to take out 30 Jugdrali opponents (led by Sigurd). The battle map is modelled after the western half of Prologue: Birth of the Holy Knight of Fire Emblem: Genealogy of the Holy War. After completion of the mission, Leif will join as a Level 1 Trickster.

The map music that plays here is "Leif's army in search of victory: Base" from Fire Emblem: Thracia 776's soundtrack.