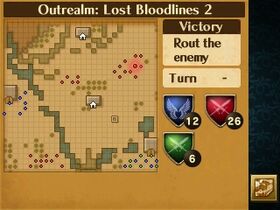 Chapter script
[view]
“Hero-King Marth—the kind King of Archanea. Seliph the Scion of Light—the noble King of Jugdral. These two kings continue their battles in the Outrealm and Chrom decides to lend a hand to Seliph to defeat Marth's army.”
—Opening Narration

Lost Bloodlines 2 (King vs. King (Holy War Side) in the Japanese version) is Xenologue 5 of Fire Emblem Awakening. This chapter takes place in Grannvale and Verdane.

This Xenologue has a difficulty of 2 stars.

Chrom joins forces with 10 Jugdrali NPCs (led by Sigurd) to take out 30 Archanean and Valentian opponents (led by Alm). The battle map is modelled after the Prologue of Fire Emblem: Genealogy of the Holy War. After completion of the mission, Alm will join as a Level 21 Dread Fighter and the player will receive a Dread Scroll.

A special conversation will trigger if the these playable battle these Champion units. Bolded names are NPCs and can be spoken to with Talk.

Only 26 enemy units and 6 allied units are on the map when you first start, but as the battle begins, 4 more enemy forces join the battle, appearing at the north-eastern of the map. This totals 48 units on the map all together, including the maximum number of your own units allowed (12).

Two of the four total Dark Mages/Sorcerers are equipped with Dark tomes, with Deirdre wielding Nosferatu (D-rank Tome) and Etzel possessing Waste (B-Rank tome). The other magic users are all carrying tomes ranking from D to B-Rank namely Elfire, Elthunder, Arcthunder, Bolganone, and Rexcalibur. The lone Manakete is equipped with a Dragonstone+.

A mid-leveled team is recommended because some of the enemies have dangerous skills to watch out for.

Chrom's team is separated into 2 groups and all start at the castles on the respective sides of the map. A well balanced team is recommended because there are a variety of enemy types on this map to deal with.

One of the more dangerous units on the map is Deen. Deen is packing the Counter Skill. If you aren't paying attention to his range, he can easily suicide rush in and make the counter damage do just enough to your units to get picked off by the rest of Alm's army on the map. It is best to take him out from a distance before the army starts to approach (preferably with a unit that has Galeforce) so that you don't have to worry about Counter.

Alm as a boss is a bit challenging due to his Dread Fighter Class having high Resistance. He wields the Alm's Blade weapon which hits fairly hard (the base Might is 15) combined with Sol, which can heal him if he inflicts any damage on your units. Take him out the best you can with physical attacks due to his high resistance.

King Marth can also be challenging due to him having the combination of Rightful King and Luna being able to pierce through your defenses and dishing out major damage. Rightful King also boosts the chance to activate Aegis so it's best to take him out with lances or with a unit with Swordbreaker.

Lastly, Tiki can be a problem due to her having high stats with her Dragonstone+. However, if you are able to take her out with Dragon-slaying weapons like Wyrmslayers, it shouldn't be too bad.