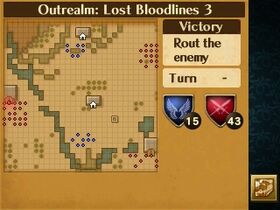 Chapter script
[view]
“Hero-King Marth and Seliph the Scion of Light. These two kings join forces and combine the military might of two continents. In order to seal away these magical talismans, Chrom challenges them to an all-out war.”
—Opening Narration

Lost Bloodlines 3 (King vs. King (Decisive Battle) in the Japanese version) is Xenologue 6 of Fire Emblem Awakening. This chapter takes place in Grannvale and Verdane.

Chrom and his forces now face the combined might of both Archanea and Jugdral's elite warriors. This map has a total of 50 enemies comprised of Heroes and Villains from the Archanea and Jugdral series ranging from Level 16 non-promoted, to Level 5 Promoted, as well as 3 special units, at levels 20 (2 of them) and 25.

This battle will be significantly hard for a medium-leveled team, regardless of the difficulty being faced. Most of the enemies will be carrying C rank weapons (typically steel), but some carry personal and Regalia weapons, such as Seliph who carries his own sword and the Regalia weapon Tyrfing.

The most dangerous units in this Xenolouge are Arvis, King Marth, Seliph, Julius, Hardin, Sigurd and Ares. Everyone else is usually a pushover, though you should still be watching for any enemies carrying Regalia weaponry. However, they're significantly easier to deal with if they're fought with a unit carrying weaponbreaker skills for the weapons that they're carrying alongside high speed.

There are only two healers on the map; Raquesis and Nanna, who carry a Recover and Physic stave respectively. As they're unpromoted, they usually won't be much of a threat if you can take the enemies out in one turn, since they have no means of attacking your units.

Make sure that you visit the two villages on the map for a random weapon reward from each of them.

A special conversation will trigger if the these playable units battle these Champion units:

“King Marth and Seliph, the Prince of Light, join forces, combining the military might of two continents. In order to seal away these summoned einherjar, Chrom challenges them to an all-out war.”
—Website Opening Narration
“Defeat both Marth's and Sigurd's armies!”
—North America eShop Opening Narration

The map music that plays here is "Prologue: Birth of the Holy Knight" from Fire Emblem: Genealogy of the Holy War's soundtrack.